Daddy Long Legs: The Natural Education of a Father (Paperback) 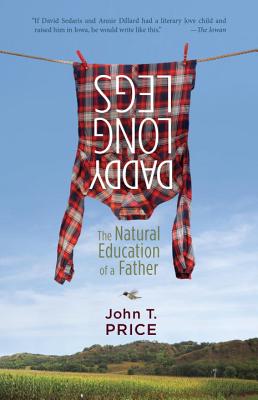 Daddy Long Legs: The Natural Education of a Father (Paperback)


Email or call for price. Handling fee may apply.
"If David Sedaris and Annie Dillard had a literary love child and raised him in Iowa, he would write like this."--The Iowan John Price appears to have thrown in the towel. He has spent the last year struggling to support his family, neglecting to spend time with his wife and children, and becoming increasingly cynical about the degraded state of the natural world around him. After a heart-attack scare, however, his wife demands that he start appreciating all the "good things" in his life: their mouse-infested old house, their hopelessly overgrown yard, and most of all, the joys and humiliations of parenthood. In his quest to become a better father, Price faces many unexpected challenges--like understanding his grandmother's decision to die, and supporting his nature-loving sons' decision to make their home a "no-kill zone" for all living creatures. Still he finds the second chance he was looking for--to save himself and, perhaps, his small corner of an imperfect yet still beautiful world.
John T. Price is an award-winning teacher of creative writing and literature at the University of Nebraska at Omaha. He earned a BA in religion, an MFA in nonfiction writing, and a PhD in English from the University of Iowa. He is the author of two memoirs: Man Killed by Pheasant and Other Kinships (Merloyd Lawrence Books/Da Capo Press, 2008)--which won the 2009 Orion Magazine Readers' Choice Award--and Not Just Any Land (University of Nebraska Press, 2004).

“If David Sedaris and Annie Dillard had a literary love child and raised him in Iowa, he would write like this.”—The Iowan

“John Price has a precious ability to distill—gently, scrupulously—the heroism and beauty from his ordinary life in an ordinary place in the middle of America. Daddy Long Legs is an everyman’s tale demonstrating the upside of Tolstoy’s famous line: happy families are all alike. Thank goodness for gifted storytellers who can depict the good luck and hard work of being a member of one of those families.”—Kurt Andersen, author of True Believers and host of Studio 360

“Like America’s best essayists—think E.B. White—John Price’s side-splitting stories about his family develop in their own time into heart-rending reflections on living and dying, and why living must be whole-hearted if it is to be anything at all, and why dying can be as beautiful as an emerging moth.”—Kathleen Dean Moore, author of Wild Comfort

“This gentle, ingenuous, and funny memoir of a flawed father is as Midwestern as the Loess Hills, and as universal as family itself. From worms to wings, mantids to spiders, dads to kids, John Price parses the natural history of a human family in all its mortality and wider habitat as well as anyone I’ve read in years.”—Robert Michael Pyle, author of The Thunder Tree and Mariposa Road

“Filled with grace, deep compassion, and the necessary consolation of the natural world, John Price’s Daddy Long Legs is a wise and articulate portrait of family and fatherhood. If this book had wings, it would settle gently onto your chest, just above the heart.”—Dinty W. Moore, author of The Mindful Writer

“John Price has long been the funniest man in the nature business. Now he's gotten personal and invited us into the fascinating ecosystem that is his family, a world of bugs and woodchucks, children and parents.  With his characteristic wit, and a little wisdom, too, he weaves family and nature into a beautiful and inspiring story of growth.”—David Gessner, author of Return of the Osprey

“In the ‘no-kill zone’ surrounding John Price’s house and yard, his kids attach freely and fiercely to bugs, tadpoles, and guy dolls. What he and his wife are really creating is a no-kill zone for the heart. Read this funny, wrenching testimony on the doubts, humiliations, and joys of committed fatherhood as you would any fine literature. But read it also as a manual on how to unearth, then build upon, your own foundations in family and place.”—Julene Bair, author of One Degree West: Reflections of a Plainsdaughter

“When Dante wandered lost in a dark wood midway through the journey of life, he was led back onto the path by the poet Virgil. John Price was led out of his own dark wood by less famous guides—his rambunctious sons, his patient wife, a wise grandmother, countless wild creatures, and the Midwestern prairie. With grace and wit, he tells in these pages the story of how the love of people and land restored his sense of purpose, his courage in the face of loss, and his joy in living. It is an ancient story, made fresh.”—Scott Russell Sanders, author of Earth Works: New & Selected Essays