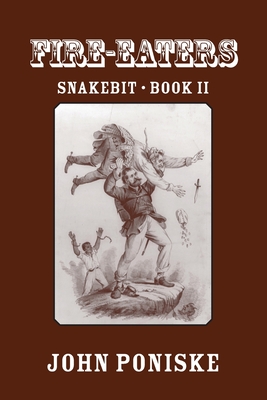 The Garretts, their friends, and family tell our American story-the story we didn't hear about in school.

In Fire-Eaters, the second book in the Snakebit series, John Poniske skillfully shows how our Dis-United States came to be on a war footing. The humor, the humanity, and the horror blend in a tightly woven tale, as historical as it is fictional.
Geoffrey Garrett acts as his family's conscience. Geoff's dead father, Valentine, acts as Geoff's compass in a world gone snakebit-crazy. The Garret and McCune families introduced in book one Prelude to War live in Maryland, a border state torn between abolitionists to the North and slavers to the South. The McCunes are slavers, the Garretts are not. Geoff and his family pay a steep price for the stand they take.
Runaways flock North, where they overrun Fortress Monroe. Armed militias spring up in every county of the country. Baltimore, Maryland, sees the first bloodshed in its streets and you are there to witness it. War profiteers slink forth as cannons are aimed and fired in Charleston, South Carolina, and the American Civil War begins in earnest.
"Scoundrels and saints, and all those between these two bookends of the human condition, help reveal an excellent and riveting tale. This story inevitably shines brilliantly on the goodness that humanity can muster into the light of day during the darkest and bleakest of times." -Keith Carriero, author of the series, Immortality Wars