Chicken Soup for the Soul: Hooked on Hockey: 101 Stories about the Players Who Love the Game and the Families that Cheer Them On (Paperback) 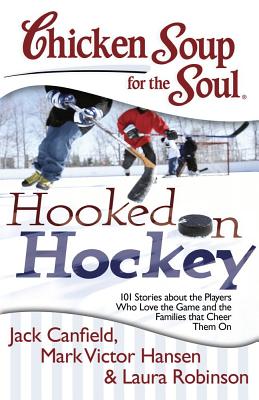 By Jack Canfield, Mark Victor Hansen, Laura Robinson
$16.95
Available to Order - Usually Arrives in Our Store in 4 to 7 Days

You’ll love these inside looks at your favorite NHL players and personalities, the biggest games in hockey history, and all the everyday joys of your favorite sport!

Meet the real Mark Messier—coaching kids in his hometown. Travel through the years with famous hockey sportscaster Brian McFarlane. Read about the kindness of Bobby Orr and a personal look at Mario Lemieux.

And in addition to all the stories by and about NHLers, you’ll read stories by fans and everyday players about big games and big plays; backyard rinks, pond hockey, and shinny games; growing up loving the game; and growing to love the game! You’ll also find inspiring stories by NHLers and Olympians about dedication, dreams, and drive, including:

Jack Canfield is co-creator of the Chicken Soup for the Soul® series, which includes forty New York Times bestsellers, and coauthor of The Success Principles: How to Get from Where You Are to Where You Want to Be. He is a leader in the field of personal transformation and peak performance and is currently CEO of the Canfield Training Group and Founder and Chairman of the Board of The Foundation for Self-Esteem. An internationally renowned corporate trainer and keynote speaker, he lives in Santa Barbara, California.

Mark Victor Hansen is a co-founder of Chicken Soup for the Soul.