Big, Hot, Cheap, and Right: What America Can Learn from the Strange Genius of Texas (Paperback) 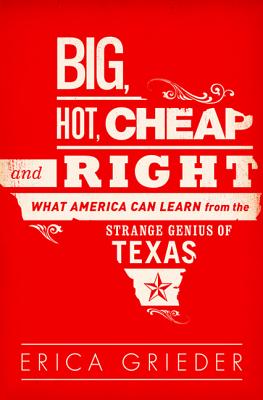 Big, Hot, Cheap, and Right: What America Can Learn from the Strange Genius of Texas (Paperback)


Available to Order - Usually Arrives in Our Store in 4 to 7 Days
Erica Grieder's Texas is a state that is not only an outlier but an exaggeration of some of America's most striking virtues and flaws. Big, Hot, Cheap, and Right is a witty, enlightening inquiry into how Texas works, and why, in the future, the rest of America may look a lot like Texas.
Erica Grieder is a senior editor at Texas Monthly. From 2007-2012, she covered Texas as the southwest correspondent for the Economist, to which she still contributes. Her writing has also appeared in the New York Times, the Spectator, the Atlantic, Foreign Policy, and the New Republic. She lives in Austin.