A Governor's Story: The Fight for Jobs and America's Economic Future (Paperback) 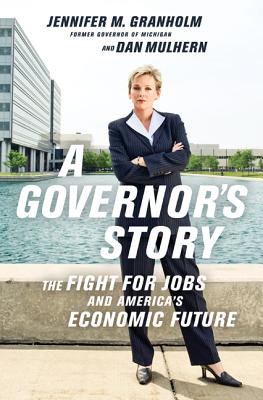 A Governor's Story: The Fight for Jobs and America's Economic Future (Paperback)


Available to Order - Usually Arrives in Our Store in 4 to 7 Days
In this national bestseller, the former two-term governor of Michigan—a state at the epicenter of the economic storms devastating middle-class lives throughout the US—offers a candid portrait of her tenure and the lessons learned, and points the way toward a new future.

Jennifer Granholm was the two-term governor of Michigan, a state synonymous with manufacturing during a financial crisis that threatened to put all America's major car companies into bankruptcy. The immediate and knock-on effects were catastrophic. Granholm's grand plans for education reform, economic revitalization, clean energy, and infrastructure development were blitzed by a perfect economic storm.

Granholm was a determined and undefeated governor, who enjoyed close access to the White House at critical moments, and is now tapped to run the Department of Energy under President Joe Biden. Ultimately, her story is a model of hope. She hauls Michigan towards unprecedented private-public partnerships, forged in the chaos of financial freefall, built on new technologies that promise to revolutionize not only the century-old auto industry but Michigan's entire manufacturing base. They offer the potential for a remarkable recovery not just for her state, but for American industry nationwide.
Jennifer Granholm was elected governor of Michigan in 2002 and re-elected in 2006. She was born in Vancouver, Canada, grew up in California, and is an honors graduate of both the University of California at Berkeley, where she now teaches in the law and public policy schools, and Harvard Law School. She is a senior advisor to the Pew Charitable Trusts Clean Energy Program, a contributor to Meet the Press, and a regular guest on other national news programs.

Dan Mulhern is an honors graduate of both Yale University and Harvard Law School, teaches at the business and law schools at the University of California at Berkeley, and is an advisor to the Families and Work Institute. He is an author, talk show host, public speaker, and expert in leadership development and the changing roles of men and women. He is married to Jennifer Granholm.