A Pope and a President: John Paul II, Ronald Reagan, and the Extraordinary Untold Story of the 20th Century (Hardcover) 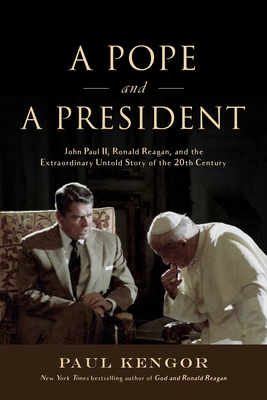 A Pope and a President: John Paul II, Ronald Reagan, and the Extraordinary Untold Story of the 20th Century (Hardcover)


Email or call for price. Handling fee may apply.
Named a World magazine “Book of the Year”!

A Singular Bond That Changed History

Even as historians credit ­Ronald Reagan and Pope John Paul II with hastening the end of the Cold War, they have failed to recognize the depth or significance of the bond that developed between the two leaders.

Acclaimed scholar and bestselling author Paul Kengor changes that. In this fascinating book, he reveals a singular bond—which included a spiritual connection between the Catholic pope and the Protestant president—that drove the two men to confront what they knew to be the great evil of the twentieth century: Soviet communism.

Reagan and John Paul II almost didn’t have the opportunity to forge this relationship: just six weeks apart in the spring of 1981, they took bullets from would-be assassins. But their strikingly similar near-death experiences brought them close together—to Moscow’s dismay.

A Pope and a President is the product of years of research. Based on Kengor’s tireless archival digging and his unique access to Reagan insiders, the book reveals:

Nancy Reagan called John Paul II her husband’s “closest friend”; Reagan himself told Polish visitors that the pope was his “best friend.” When you read this book, you will understand why. As kindred spirits, Ronald Reagan and John Paul II united in pursuit of a supreme objective—and in doing so they changed history.

Paul Kengor, PhD, is the New York Times bestselling author of God and Ronald ­Reagan, The Crusader: Ronald Reagan and the Fall of Communism, 11 Principles of a Reagan Conservative, Dupes, The Communist, and other books. A professor of political science and the executive director of the Center for Vision and Values at Grove City College, he has written for a range of popular and scholarly publications, including the New York Times, the Wall Street Journal, the Washington Post, National Review, Political Science Quarterly, Christianity Today, the National Catholic Register, and the National Catholic Reporter. Kengor has appeared on Fox News, MSNBC, NPR, C-SPAN, and many other outlets. He and his family live in ­Pennsylvania.
Praise for A Pope and a President

“This book superbly captures and perfectly portrays the profound depth of the bond between John Paul II and Ronald Reagan. This is key. You cannot understand why Soviet communism collapsed unless you have a good grasp of just how extraordinarily deep was the bond that existed between those two great leaders of the 20th century. . . . There is a great deal of important and interesting information packed into this very well researched work. It makes a reader appreciate just how fortunate we were to have this particular pope and this particular president at that point in history.” —Washington Times

“Excellent . . . Dr. Kengor’s book is extraordinary in that he is brave enough to trace the importance of religious faith in the story of communism’s downfall. . . . A historical tome that is not only detailed, informative, and educational, but also inspiring and encouraging.” —The Imaginative Conservative

“[Kengor] has written the most exhaustive and definitive account of Communism’s twentieth-century assault on America to date.” —Townhall

“Mr. Kengor’s research is prodigious, his analysis keen and insightful, his writing clear, and his work distinguished. His command of the Reagan legacy is incomparable.” —Tony Dolan, chief speechwriter and special assistant to President Reagan

“Kengor makes clear just how central the defeat of the Soviet Union was to Reagan’s personal project.” —National Review

“[Kengor provides] more fascinating and never-before-reported details about how Ronald Reagan succeeded than any other Cold War historian. . . . Kengor somehow got his hands on more secret documents than the KGB.” —American Thinker

“There are few historians who are closer students of the Reagan message, his thoughts, his utterances, and his convictions than Paul Kengor.” —William J. Bennett, President Reagan’s secretary of education