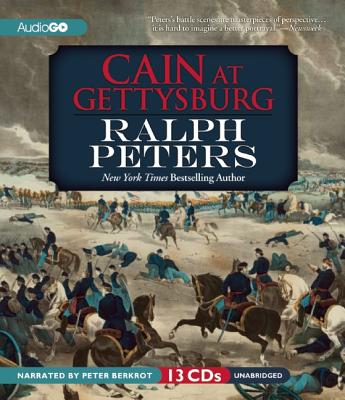 
Title unavailable, please email for information.
Two mighty armies blunder toward each other, one led by confident, beloved Robert E. Lee and the other by dour George Meade. They'll meet in a Pennsylvania crossroads town where no one planned to fight. In this sweeping, savagely realistic novel, the greatest battle ever fought on American soil explodes into life at Gettysburg. As generals squabble, staffs err. Tragedy unfolds for immigrants in blue and barefoot rebels alike. The fate of the nation will be decided in a few square miles of fields. There are no marble statues here, only men of flesh and blood, imperfect and courageous.Following a tough Confederate sergeant from the Blue Ridge, a bitter Irish survivor of the Great Famine, a German political refugee, and gun crews in blue and gray, Cain at Gettysburg, from New York Times bestselling author and former US Army officer Ralph Peters, is bound to become a classic of men at war.
Ralph Peters, "New York Times" bestselling author of "The War After Armageddon," is a retired U.S. Army officer; a controversial strategist and veteran of the intelligence world; and a journalist who appears frequently in the broadcast media. Peters has studied the Battle of Gettysburg since childhood, when his parents took him on annual pilgrimages to that hallowed ground.