The America Syndrome: Apocalypse, War, and Our Call to Greatness (Paperback) 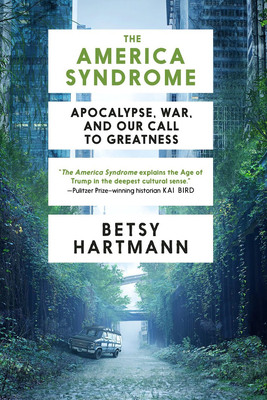 By Betsy Hartmann
Please email or write store for pricing and availability information.
Special Request - May Not Be Available

Has apocalyptic thinking contributed to some of our nation's biggest problems—inequality, permanent war, and the despoiling of our natural resources? From the Puritans to the present, historian and public policy advocate Betsy Hartmann sheds light on a pervasive but—until now—invisible theme shaping the American mindset: apocalyptic thinking, or the belief that the end of the world is nigh. Hartmann makes a compelling case that apocalyptic fears are deeply intertwined with the American ethos, to our detriment. In The America Syndrome, she seeks to reclaim human agency and, in so doing, revise the national narrative. By changing the way we think, we just might change the world.

Writer, educator, and women's rights advocate BETSY HARTMANN's books and appearances have had an impact on national debates on population control, environmentalism, and national security. Now in its third edition, Hartmann's feminist classic, Reproductive Rights and Wrongs: The Global Politics of Population Control, tackles the powerful myth of overpopulation and its negative consequences for women's reproductive health and rights. She is the co-author of A Quiet Violence: View from a Bangladesh Village and co-editor of the anthology Making Threats: Biofears and Environmental Anxieties. Her political thrillers, The Truth About Fire and Deadly Election, explore the threat the Far Right poses to American democracy. Hartmann is professor emerita of Development Studies and senior policy analyst of the Population and Development Program at Hampshire College. She lives in western Massachusetts.

"Apocalypse, says Betsy Hartmann, is as American as apple pie. In an insightful, crisply written blend of memoir, social history, and political theory, Hartmann shows how the prospect of the imminent end of days has been used for centuries to justify almost any American action—and feed the destructive conviction that this country has a special mission of salvation. Left and right, secular and religious—Americans of every stripe have been infected with the virus of apocalypse. Hartmann shows why we badly need a cure." —Charles Mann, author of 1491 and the forthcoming The Wizard and the Prophet

"From its origins in Puritan thinking Betsy Hartmann traces the history of how fears of imminent disaster have shaped American thinking on war, population and most recently climate change, invoking fear and violence as responses when practical cooperation would serve so much better for dealing with all manner of social ills. As political therapy for troubled times this very timely volume shows that overcoming misplaced fear of the future is an essential step to seeking ways to live together peacefully in a rapidly changing world." —Simon Dalby, Balsillie School of International Affairs

"Betsy Hartmann calmly eviscerates the prophets of apocalypse whether it be Malthusian doomsayers obsessed about brown-skinned immigrants with high birth rates or climate-change fearmongers . . . Hartmann’s book is a timely debunking of anti-intellectualism in American life and of all those demagogues who have stoked American nativist paranoia. The America Syndrome explains the Age of Trump in the deepest cultural sense." —Kai Bird, Pulitzer Prize–winning historian and executive director of the Leon Levy Center for Biography at CUNY Graduate Center in New York City

"The 'America First' stance espoused by Donald Trump appears as little more than a pastiche of crowd-pleasing campaign tropes, but in fact draws on themes long embedded in American political thought. To guide us through this rich and momentous history, stretching from the Pilgrims' landing in Plymouth to the onset of climate change, there is no better account than Betsy Hartmann's The America Syndrome." —Michael Klare, author of The Race for What's Left

“For large swaths of the body politic, the December 2016 US elections offered up the prospect of a long and dark winter in America. Hartmann shows that catastrophist thinking has a deep history in the United States, which she traces from early Puritanism to utopian movements, Malthusianism, the Cold War, and more recently global climate change. The America Syndrome is a powerful reminder of how deep is the river of fear and apocalyptic thinking and how it works against important forms of solidarity and common humanity. A timely and provocative primer for the world that President Trump has wrought.” —Michael Watts, Class of ’63 Professor, UC Berkeley

"Betsy Hartmann has written a compelling tragedy of the American psyche that is a fitting riposte to Trumpery. It's a tragedy about a country that lacks self-awareness, that thinks itself special when it is 'not so special after all.' Militarists and apocalyptic environmentalists alike are caught up in this quagmire of exceptionalism, this tragedy of failed imperialism. Cut the hubris, America; it is your undoing." —Fred Pearce, environment consultant, New Scientist magazine