The End of the World Notwithstanding: Stories I Lived to Tell (Hardcover) 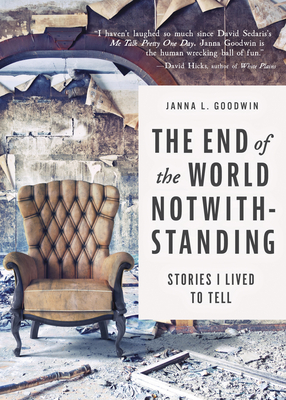 The End of the World Notwithstanding: Stories I Lived to Tell (Hardcover)


Available to Order - Usually Arrives in Our Store in 4 to 7 Days
Janna L. Goodwin teaches in the Communication department and the Mile High MFA program at Regis University in Denver, Colorado. She grew up in Wyoming, performed improv comedy for a few years with Moving Violations and other groups in the Los Angeles area, and--after living for a year in France--studied theatre at the National Shakespeare Conservatory in New York. She earned her BA in Film and Music from Hampshire College and her doctoral degree in Communication from the University of Massachusetts, Amherst. Her plays have been produced by independent theatre companies on the East Coast and in Colorado. She has created and directed ensemble comedies for many years, including The House Not Touched by Death (Pilgrim Theatre Collective; the Ko Festival of Performance) and Just Pretend Everything Is Perfectly Normal (Playwright Theatre). Her most recent solo show, You Are Reminded That Your Safety is Your Own Responsibility, premiered at the United Solo Theatre Festival in New York, toured a bit, and provided the original material for this, her first book.