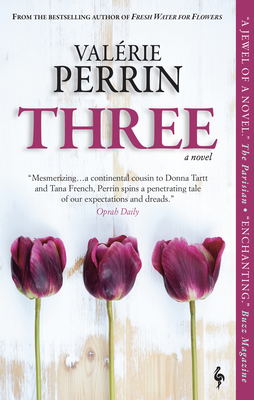 “Spectacular! Perrin has written a masterpiece of friendship, love, loss and life, weaving the lives of three friends — Adrien, Etienne, and Nina — into a magnificent novel. There are no words to really describe; it’s a must read! Love it!”
— Stephanie Crowe, Page and Palette, Fairhope, AL

From the international bestselling author of Fresh Water for Flowers, a beautifully told and suspenseful story about the ties that bind us and the choices that make us who we are.

1986: Adrien, Etienne and Nina are 10 years old when they meet at school and quickly become inseparable. They promise each other they will one day leave their provincial backwater, move to Paris, and never part.

2017: A car is dragged up from the bottom of the lake, a body inside. Virginie, a local journalist with an enigmatic past reports on the case while also reflecting on the relationship between the three friends, who were unusually close when younger but now no longer speak. As Virginie moves closer to the surprising truth, relationships fray and others are formed.

Val rie Perrin has an unerring gift for delving into life. In Three, she accompanies readers through a sequence of heart-wrenching events and revelations that span three decades. Three tells a moving story of love and loss, hope and grief, friendship and adversity, and of time as an ineluctable agent of change.