In His Own Image (Paperback) 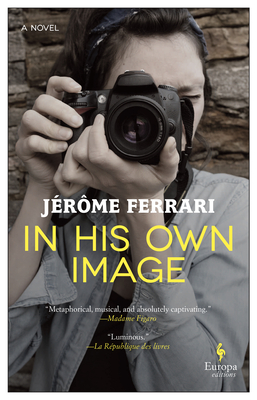 In His Own Image (Paperback)

From Goncourt Prize-winning author J r me Ferrari, a bewitching story of passion, death, and love, and a powerful reflection on the ambiguous relationship between art and reality

Born in a small town in Corsican countryside, Antonia grows up in a place of deeply-rooted traditions and strong family ties. When she's fourteen, her uncle, a priest, gives her a camera--suddenly changing the way she looks at the world and igniting a passion that will prompt her to become a photojournalist.

Over two decades later, Antonia is walking around the port of Calvi when she runs into Dragan, a soldier whom she had met when she was reporting on the war in the former Yugoslavia. The two spend the entire night in deep conversation, reminiscing about their experience of the conflict. Shortly after saying goodbye, as she drives home Antonia loses control of her car, plunges off a cliff and is killed instantly. Tasked with officiating his niece's funeral, Antonia's uncle is forced to reflect on her life and legacy, and on the profound questions they beg about ambition and doubt, passion and guilt, representation and reality.

Wide in scope but rich in detail, restrained yet deeply moving, In His Own Image masterly weaves together the story of an individual life with universal themes that resonate across time and space.