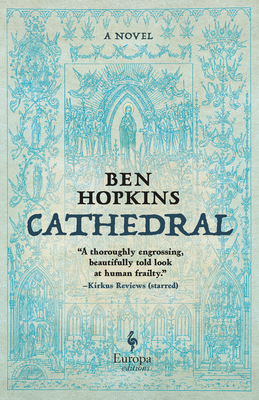 A thoroughly immersive read and a remarkable feat of imagination, Cathedral tells a sweeping story about obsession, mysticism, art, and earthly desire in gripping prose. It deftly combines historical fiction and a tale of adventure and intrigue.

At the center of this story is the Cathedral. Its design and construction in the 13th and 14th centuries in the Rhineland town of Hagenburg unites a vast array of unforgettable characters whose fortunes are inseparable from the shifting political factions and economic interests vying for supremacy. From the bishop to his treasurer to local merchants and lowly stonecutters, everyone, even the town's Jewish denizens, is implicated and affected by the slow rise of Hagenburg's Cathedral, which in no way enforces morality or charity. Around this narrative center, Ben Hopkins has constructed his own monumental edifice, a novel that is rich with the vicissitudes of mercantilism, politics, religion, and human enterprise.

Fans of Umberto Eco, Hilary Mantel, and Ken Follett will delight at the atmosphere, the beautiful prose, and the vivid characters of Ben Hopkins's Cathedral.

"Cathedral is a brilliantly organised mess of great, great characters. It is fascinating, fun, and gripping to the very end."--Roddy Doyle, Booker Prize-winning author of Paddy Clarke Ha Ha Ha

Ben Hopkins is a screenwriter, film-maker and novelist. He has lived in London and Istanbul and now lives in Berlin. His films include features and shorts, fiction and documentary, and have won awards at festivals such as Berlin, Locarno, Antalya and Toronto Hot Docs.