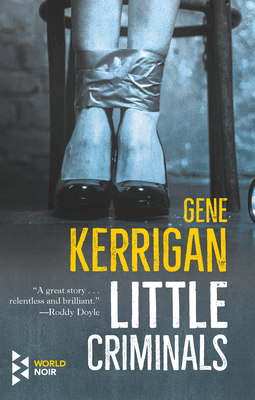 Frankie Crowe is not one of the great criminal masterminds. A small time thug, he thinks-to the extent he can-that kidnapping one of Dublin's newly rich businessmen just may be the low-risk fast track to the status and money he knows he deserves. When the local crime boss refuses him permission to make the snatch, he shoots the boss and commences with his plan-such as it is.

After a somewhat haphazard selection, Frankie's crew of casually vicious miscreants kidnaps the wife of a moderately prosperous lawyer rather than the spouse of the wealthy banker Frankie thought he had chosen. From that point forward, no one from Inspector John Grace to that pillar of Dublin gangland Jo-Jo Mackendrick can predict the next twist in a scheme that has gone from wrong to bad to worse.

Like Elmore Leonard's, Kerrigan's writing is propelled by character. His novel is alive to the codes and expectations of the varied sections of modern Irish society. His narrative is taut and harrowing, his dialogue spot-on. The resulting story is everything Frankie Crowe is not: smart, assured and confident-forming an exciting combination of entertainment and art available only in superior crime fiction.

Gene Kerrigan is a Dublin writer. He has been a journalist for over thirty years, was Dublin's Journalist of the Year in 1985 and 1990, and is the author of Another Country, This Great Little Nation (with Pat Brennan), Never Make a Promise You Can't Break: How to Succeed in Irish Politics, and the novel, Little Criminals.