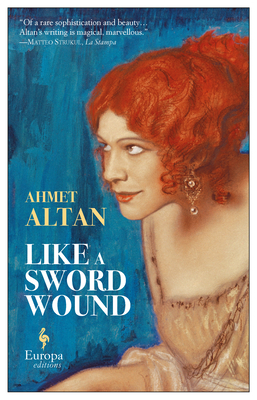 By Ahmet Altan, Brendan Freely (Translator), Yelda Türedi (Translator)
$18.00
Available to Order - Usually Arrives in Our Store in 4 to 7 Days

A "magical, marvellous" epic of an empire in collapse: Book one in the acclaimed Ottoman Quartet by the award-winning Turkish author and political dissident (La Stampa, Italy).

Tracking the decline and fall of the Ottoman empire, Ahmet Altan's Ottoman Quartet spans fifty years from the end of the nineteenth century to the post-WWI rise of Atatu]rk as leader of the new Turkey. In Like a Sword Wound, a modern-day resident of Istanbul is visited by the ghosts of his ancestors, finally free to tell their stories "under the broad, dark wings of death."
Among the characters who come to life are an Ottoman army officer; the Sultan's personal doctor; a scion of the royal house whose Western education brings him into conflict with his family's legacy; and a beguiling Turkish aristocrat who, while fond of her emancipated life in Paris, finds herself drawn to a conservative Muslim spiritual leader. As their stories of intimate desire and personal betrayal unfold, the society that spawned them is transforming and the sublime empire disintegrating.
Here is a Turkish saga reminiscent of War and Peace, written in lively, contemporary prose that traces not only the social currents of the time but also the erotic and emotional lives of its characters. "An engrossing novel of obsessive love and oppressive tyranny, a tale of collapse that dramatizes the fateful moments of an empire and its subjects."--Publishers Weekly (starred review)