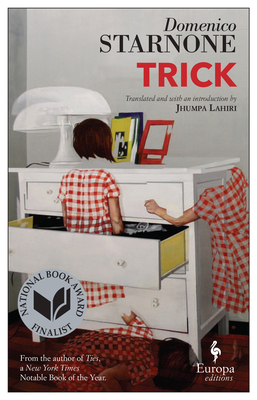 A weary man faces the ghosts of his past while caring for his grandson in Naples in this National Book Award finalist novel by the acclaimed author of Ties.

In Trick, Domenico Starnone presents an unusual duel between two formidable minds. One is Daniele Mallarico, a once-successful illustrator who feels his artistic prowess fading. The other is Mario, Daniele's four-year-old grandson. Daniele is living in virtual solitude in Milan when his daughter asks him to come to Naples to babysit Mario for a few days

Shut inside his childhood home--an apartment in the center of Naples that is filled with memoires of Daniele's past--grandfather and grandson match wits as Daniele heads toward a reckoning with his own ambitions and life choices. Meanwhile, Naples pulses outside, a wily, passionate city whose influence can never be shaken.

As translator Jhumpa Lahiri says in her introduction, Tricks is "an extremely playful literary composition" by the Strega Prize-winning novelist whom many consider to be one of Italy's greatest living writers.

Domenico Starnone was born in Naples and lives in Rome. He is the author of thirteen works of fiction, including First Execution (Europa, 2009), Via Gemito, winner of Italy's most prestigious literary prize, the Strega, and Ties (Europa, 2016), a New York Times Editors pick. Jhumpa Lahiri is the Pulitzer Prize-winning author of The Interpreter of Maladies. Her books include The Namesake, Unaccustomed Earth, The Lowland, and, most recently, In Other Words, an exploration of language and identity.