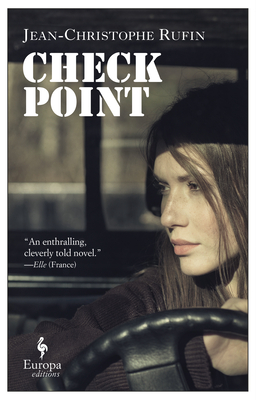 By Jean-Christophe Rufin, Alison Anderson (Translated by)
$18.00
Available to Order - Usually Arrives in Our Store in 4 to 7 Days

A work of suspense and psychological tension set in the world of international humanitarian aid, Checkpoint is the latest bestselling novel by the founder of Doctors Without Borders, Jean-Christophe Rufin.

The four men accompanying Maud on the aid convoy are very different from the clichéd image of the humanitarian volunteer. One by one, they reveal the secret wounds that have brought them to this conflict zone and, mile by mile, the true nature of their cargo.

Prize-winning author, Jean-Christophe Rufin offers up a powerful psychological literary thriller that asks vital questions about the role of humanitarian action in today's world, bringing to light the most fundamental dilemmas of our age. As a new kind of violence insinuates its way into the heart of Europe, this novel asks whether it is more effective to take up arms against the enemy or attempt to counter violence with benevolent acts and enlightenment ideals.

Praise for Checkpoint and Jean-Christophe Rufin

“This mix of well-crafted characters, psychological suspense, and the harsh realities of life in wartime results in a nail-biting, challenging literary thriller. A novel of war that asks hard questions about what decency demands of us as human beings.”
—Kirkus Reviews

"Jean-Christophe Rufin knows how to tell a story. His characters' lives dramatize big questions about what it means to be alive and to act."
—France Info

"Jean-Christophe Rufin has written an adventure book...The success of this great novel lies in its suspense and in the meticulous psychology of its protagonists."
—Le Nouvel Observateur

"Rufin's The Red Collar is perfectly paced, darkly humorous and an excellent window into the turmoil and emerging politics of postwar France."
—San Francisco Chronicle

"The Red Collar is a modern parable about loyalty to others, fidelity to one's convictions, and the self-effacement needed to bear the consequences of living by one's belief."
—New York Journal of Books