Shelter in Place: A Novel (Paperback) 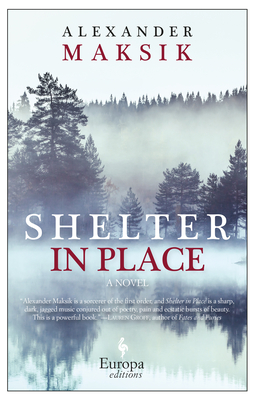 Shelter in Place: A Novel (Paperback)

Set in the Pacific Northwest in the jittery, jacked-up early 1990s, Shelter in Place, by one of America's most thrillingly defiant contemporary authors, is a stylish literary novel about the hereditary nature of mental illness, the fleeting intensity of youth, the obligations of family, and the dramatic consequences of love.

Joseph March, a twenty-one-year-old working class kid from Seattle, is on top of the world. He has just graduated college and his future beckons, unencumbered, limitless, magnificent. Joe's life implodes when he starts to suffer the symptoms of bipolar disorder, and, not long after, his mother kills a man she's never met with a hammer.

Joe moves to White Pine, Washington, where his mother is serving time and his father has set up house. He is followed by Tess Wolff, a fiercely independent woman with whom he has fallen in love. The lives of Joe, Tess, and Joe's father fall into the slow rhythm of daily prison visits followed by beer and pizza at a local bar. Meanwhile, Anne-Marie March, Joe's mother, is gradually becoming a local heroine—many see her crime as a furious, exasperated act of righteous rebellion. Tess, too, has fallen under her spell. Spurred on by Anne-Marie's example, Tess enlists Joe in a secret, violent plan that will forever change their lives.

Maksik sings of modern America's battered soul and of the lacerating emotions that make us human. Magnetic and masterfully told, Shelter in Place is about the things in life we are willing to die for, and those we're willing to kill for.
Alexander Maksik is the author of the novels You Deserve Nothing (Europa, 2011) and A Marker to Measure Drift (Knopf, 2013), which was a New York Times Book Review Notable Book, as well as a finalist for both the William Saroyan International Prize for Writing and Le Prix du Meilleur Livre Étranger.

Praise for Shelter in Place

"Alexander Maksik is a sorcerer of the first order, and Shelter in Place is a sharp, dark, jagged music conjured out of poetry, pain and ecstatic bursts of beauty. This is a powerful book."
—Lauren Groff, author of Fates and Furies

"Shelter in Place is a magnificent novel. Alexander Maksik charts the legacy of violence and the limits of justice with grace, power, and clarity."
—Anthony Marra, author of A Constellation of Vital Phenomena and The Tsar of Love and Techno

"An unsettling and beautiful exploration of mental illness, love, violence, family and sexual politics. Maksik’s artful story outruns all sorts of received ideas and cliched narratives, and slips into deeply original territory. You’ll be haunted by it in the best possible way."
—Katie Roiphe, author of The Violet Hour and In Praise of Messy Lives

"Unsettling and honest, a remarkably insightful portrait of mental illness, Shelter in Place is elegiac, savage and mournful, a beautifully written novel about the echoes of our actions, of love and its consequences."
—Aminatta Forna, author of The Hired Man and The Memory of Love

"Shelter In Place is a love story like none I’ve ever read before. Lust, longing, betrayal, revenge—it’s all here, but only when and where you least expect it. Densely ruminative, and bracingly unromantic, the ballad of Tess, Joe, and his parents tests the brutal outer-limits of patriarchy, the bleak realities of untreated mental illness, and the nature of loyalty in a world where every woman is out for herself. And every man, as well."
—Kate Bolick, author of Spinster: Making a Life of One’s Own

"Shelter in Place takes a brilliant look at the fractured, jagged nature of masculinity, at how gender warps consciousness in ways we struggle and fail to understand. Maksik writes from inside the fire of a mind unfiltered, unsettled, unresigned, a mind it would be too simple to call unwell. The narrator’s episodes of mania are glittering raptures, electric; his descents into the infinite nothingness of depression drawn so true to that state of absence, of blindness, of Styron’s ‘darkness visible,’ you feel all the numb trapped terror of it. This book’s cutting, unchecked prose makes you an accomplice to violence, and leads you to realize we all are—formed and directed by cruelty, whether as victims, agents, warriors, survivors, or witnesses. Shelter in Place poses the hard, important, and perhaps unanswerable question—how do you live with your self?
—Merritt Tierce, author of Love Me Back

"There's something truly exhilarating about reading a novel that's so audaciously original, so inventive and let's be honest, so sort of weird that you want to put it in the hands of just about everyone you know. And that's a perfect description of Alexander Maksik's stunningly unsettling third novel, Shelter in Place."
—San Francisco Chronicle

"Maksik has an expansive and affecting vision of human capacity. He also evokes time and place particularly well—early 1990s Washington here is as vivid as Santorini or Paris in his other books."
—The New York Times

"A riveting, darkly beautiful novel . . . poised to be one of the big books of the season – the kind of sweeping story that encompasses so much of what it is to be human."
—Departures

"Sensual, musical...Shelter in Place is as unquestionably brilliant as it is painful; a rare meditation on mania, depression, and the rage of youth."
—The Huffington Post

"[A] striking narrative. . . Maksik's Joe March is a man for today as much as Ishmael and Stephen were for Melville's and Joyce's days."
—Shelf Awareness

"Shelter in Place subverts the Manic Pixie Dream Girl by taking her to her extreme conclusion. ...This is a book about the women in Joe’s life– mothers and lovers, sisters and strangers– but it manages to be feminist, angry, and deeply moving."
—Book Riot

“On every page we're reminded of the paradox of how mysterious, thorny, and delicate family relationships can be.”
—Kirkus Reviews

“Maksik is one of the most exacting and daring writers we have . . . from the first sentence there’s no turning away from this story.”
—Literary Hub

"Delicately nuanced, this mini saga of an America that lays just behind the headlines is full of emotions, lacerating but true to life in that it is about a recognisable form of everyday life and digs up feelings we all have inevitably had at times."
—Lovereading
Praise For the New York Times Notable Book, A Marker to Measure Drift

“A bold book, and an instructive one. . . . [Maksik] has illuminated for us, with force and art, an all too common species of suffering.”
—Norman Rush, The New York Times Book Review

“No novel I read this year affected me more powerfully than A Marker to
Measure Drift.”
—Richard Russo, author of Empire Falls

“A truly breathtaking accomplishment . . . a work of stupendous imagination,
like Dave Eggers’ What is the What, or (dare I say?) like Mark Twain’s
Huckleberry Finn.”
—Ayelet Waldman, author of Love and Treasure

“Beautiful...It will leave you breathless and speechless; it will send you
reeling.”
—The San Francisco Chronicle


Praise for You Deserve Nothing

“A powerful, absorbing novel . . . Maksik is an unusually gifted writer.”
—Tom Perrotta, author of The Abstinence Teacher and The Leftovers

“Here is a writer who understands why the artful telling of a difficult story
is a brave and important thing to do.”
—John Burnham Schwartz, author of Reservation Road

“A provocative, constantly surprising, and original novel. This is a thrilling
debut.”
—Susanna Moore, author of In the Cut