The Carousel of Desire (Paperback) 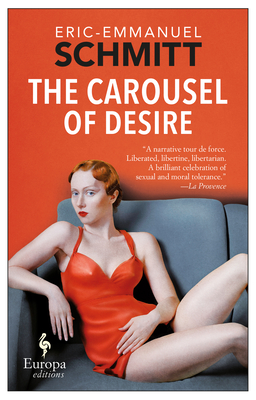 The Carousel of Desire (Paperback)


Available to Order - Usually Arrives in Our Store in 4 to 7 Days
Celebrated short-story writer, Eric-Emmanuel Schmitt's (The Most Beautiful Book in the World) first full-length novel to appear in English is a literary tour de force, a magnificent cathedral of contemporary eroticism.

The Carousel of Desire is a sexual and romantic saga told with a master storyteller's feel for character and plot and a philosopher's abiding preoccupation with what makes life truly worthwhile. With tenderness and infectious delight, Schmitt tells an exuberant tale about class and community and about the vastness of human experience. Schmitt's love of coincidence and serendipity is surpassed only by his affection for his flawed, all-too-human characters: Zachary Bidermann, the powerful European Union commissioner; Faustina, the fashionable book publicist; François-Maxime de Couvigne, the happily married banker with more than a few secrets; Marcelle, enamored with a handsome illegal immigrant; Miss Beauvert, who makes love with her parrot, Copernicus. These and many more unforgettable characters animate this story of simmering desire and the antics of the mischievous and playful god, Eros.

Schmitt's inclusive, affirming vision of human sexuality is refreshingly free of moral judgement, yet enriched by an understanding of the complex ethics of human relationships and the redemptive power of love.
Eric-Emmanuel Schmitt is one of Europe’s most popular and acclaimed authors and playwrights. His many novels and story collections include The Most Beautiful Book in the World (Europa, 2009), Oscar and the Lady in Pink, and Monsieur Ibrahim and the Flowers of the Koran. A keen music lover, Schmitt has also translated into French The Marriage of Figaro and Don Giovanni from the original Italian. In 2001, he was awarded the French Academy’s Grand Prix du Théâtre. Schmitt divides his time between Paris and Brussels.

Praise for The Carousel of Desire

“This monumental novel is satisfying at all turns.”
—Foreword Reviews

“The Carousel of Desire is a terrific encyclopedia of love and desire.
A beautiful novel, at once light, funny, and somber.”
—L’Express

"...[an] evocative and beautiful ode to love, heartbreak, and humanity."
—Booklist

“One of Mr. Schmitt’s chief strengths is the ability to precisely chronicle
the shifts in his characters’ mental and emotional states, a skill he employs
to illuminate the changeable nature of the mind and heart.”
—Electric Literature

“With chapter titles taken from hymns, this choral tale moves toward
a lovely finale, a hymn of praise to love.”
—Sud Ouest