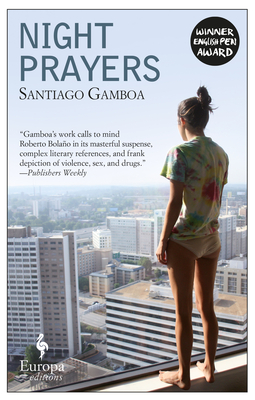 By Santiago Gamboa, Howard Curtis (Translated by)
Please email or write store for pricing and availability information.
Special Request - May Not Be Available

A thrilling literary novel about crime and corruption in Latin America told in alternating voices and perspectives, Night Prayers is the story of Manuel, a Colombian philosophy student arrested in Bangkok and accused of drug trafficking. Unless he enters a guilty plea he will almost certainly be sentenced to death. But it is not his own death that weighs most heavily on him but a tender longing for his sister, Juana, whom he hasn't seen for years. Before he dies he wants nothing more than to be reunited with her. Fans of both Roberto Bolaño and Gabriel García Márquez will find much to admire in this story about the mean streets of Bogotá, the sordid bordellos of Thailand, and a love between siblings that knows no end.

As a boy, Manuel was a dreamer, a lover of literature, and a tagger. His sister Juana made a promise to do everything in her power to protect him from the drug-and violence-infested streets of Bogotá. She decided to take him as far from Colombia as possible, and in order to raise the money to do so, she went to work as a high-priced escort and entered into contact with the dangerous world of corrupt politicians. When things spun out of control she was forced to flee, leaving her beloved brother behind.

Juana and Manuel's story reaches the ears of the Colombian counsel general in New Delhi, and he tracks down Juana, now married to a rich Japanese man, in Tokyo. The counsel general takes it upon himself to reunite the two siblings—a feat that may be beyond his power.

With the stylishness that has earned him a reputation as one of "the most important Colombian writers" (Manuel Vázquez Montalbán), Santiago Gamboa lends his story a driving, irresistible rhythm.

Novelist, short story writer, and journalist, Santiago Gamboa was born in Colombia in 1965. His English language debut, published by Europa in 2012, was the novel Necropolis, winner of the Otra Orilla Literary Prize.

For Europa Editions, Howard Curtis has translated five novels by Jean-Claude Izzo, including all three books in his Marseilles trilogy, as well as fiction by Francisco Coloane, Canek Sánchez Guevara, Caryl Férey, and Santiago Gamboa.

"Gamboa’s wide-ranging plot lines keep the reader moving at a rapid pace."
—Seeing the World Through Books about Night Prayers

"Gamboa's strength is an apparently inexhaustible stream of narriative invention, an addictive 'and then, and then' quality that, at its best, erupts into flourishes of breathtaking poetry."
—Shelf Awareness about Necropolis

"Each novel by Santiago Gamboa is at the forefront of the best Latin American novels. Gamboa dismantles the legacy of Chandler and Hammett, adapting it to the craggy environs of Colombia, and adds to it a tireless sense of ethics. His novels revitalize a genre that we thought could do no more."
—Martín Solares, author of The Black Minutes, about Necropolis

"This novel stands on its own as a masterwork of storytelling."
—Publishers Weekly about Necropolis

"A work that is by turns tender, farcical, explicit, bombastic and never less than engrossing."
—The Irish Times about Necropolis