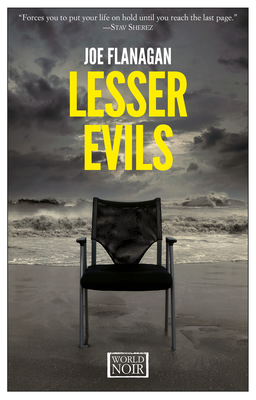 
Available to Order - Usually Arrives in Our Store in 4 to 7 Days
An exciting entry into the noir canon, Joe Flanagan's Lesser Evils expertly reimagines 1957 Cape Cod, where the mystifying murder of a local child brings us into a world of intrigue-honed by intricate plotting, sharp dialogue, and original characters-that culminates in a conclusion both surprising and deeply moving.

When the first young boy goes missing in a quiet Cape Cod town, Lieutenant Bill Warren is pulled into a morass that promises no happy ending. As his pursuit uncovers the unimaginable, he is led into a world of gambling, drug peddling, corruption, and secret psychiatric experiments. Now he must fight to maintain control of an investigation that more and more people-from the state police to the district attorney to a tenacious Boston reporter-have become seriously interested in. As facts become murkier and the threat rises, Warren struggles to survive in a world where the police can be just as corrupt as the criminals they chase, and where a murder inquiry will ultimately lead to his front door. Years later, the locals will still be debating whether the case's resolution was factual or miraculous.

Flanagan's debut novel is a modern take on classic noir crime fiction. Readers will be eager for his next offering.
Joe Flanagan was born in Hyannis, Massachusetts. He has worked as a freelance writer, a speechwriter, and magazine editor. His fiction has appeared in the anthology Glimmer Train. He lives in Alexandria, Virginia.

"Flanagan’s highly impressive debut transposes the corrupt world of James Ellroy’s L.A. Confidential to the Cape Cod of 1957...the climactic face-off between Warren and the monstrous Stasiak is an instant classic."—Publisher's Weekly (Starred Review)

"With subtlety and admirable attention to detail Joe Flanagan builds a convincing atmosphere of evil." —Gene Kerrigan, author of The Rage

"Lesser Evils is remarkably assured, wonderfully atmospheric and ferociously intelligent. Flanagan skillfully plunges you into the sleepy Mid-Fifties Cape community as a series of horrific murders lays bare secrets, corruption and malice. A deftly plotted and perfectly realized crime novel that features one of the most interesting, complex and likable protagonists of recent times."
—Stav Sherez, author of Eleven Days