The Pope's Daughter: A Novel of Lucrezia Borgia (Paperback) 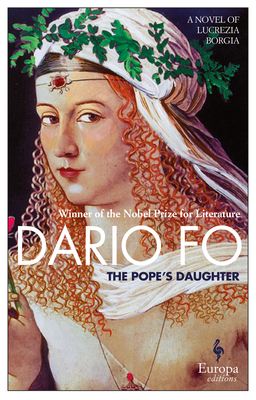 By Dario Fo, Anthony Shugaar (Translated by)
$17.00
Available to Order - Usually Arrives in Our Store in 4 to 7 Days

Lucrezia Borgia is one of the most vilified women in modern history. The daughter of a notorious pope, she was twice betrothed before the age of eleven and thrice married—one husband was forced to declare himself impotent and thereby unfit and another was murdered by Lucrezia’s own brother, Cesar Borgia. She is cast in the role of murderess, temptress, incestuous lover, loose woman, femme fatale par excellence.

But there are two sides to every story.

Lucrezia Borgia is the only woman in history to have serve as the head of the Catholic Church. She successfully administered several of Renaissance Italy’s most thriving cities, founded one of the world’s first credit unions, and was a generous patron of the arts. She was mother to a prince and to a cardinal. She was a devoted wife to the Prince of Ferrara, and the lover of the poet Pietro Bembo. She was a child of the renaissance and, in many ways, the world’s first modern woman.
In this richly imagined novel, Nobel laureate Dario Fo reveals Lucrezia’s humanity, her passion for life, her compassion for others, and her skill at navigating around her family’s evildoings. The Borgias are unrivalled for the range and magnitude of their political machinations and opportunism. Fo’s brilliance rests in his rendering their story as a shocking mirror image of the uses and abuses of power in our own time. Lucrezia herself becomes a model for how to survive and rise above those abuses. Part Wolf Hall, part House of Cards, The Pope's Daugther will appeal to readers of historical fiction and of contemporary fiction alike and will delight anyone fascinated by Renaissance Italy.

Born near Laggo Maggiore in Italy in 1926, Dario Fo is an actor, playwright, comedian, director, songwriter and political campaigner. His first one-act play was produced in 1958 and since then he has written, directed and acted in over forty plays and theatrical productions. In 1997 he was awarded the Nobel Prize in Literature. In the words of the Nobel Prize committee: “He if anyone merits the epithet of jester in the true meaning of that word. With a blend of laughter and gravity he opens our eyes to abuses and injustices in society and also the wider historical perspective in which they can be placed.” The Pope’s Daughter is his first novel.

"The Pope’s Daughter, the story of Lucrezia Borgia as a living, feeling woman rather than just another bodice waiting to be ripped, stands as an evident tribute both to its much maligned heroine...in all her beauty and fiery dignity."
—The New York Times

“[. . .] not quite like any of the other thousand books written on Lucrezia Borgia: a deeply felt three-dimensional portrait that replaces flamboyant rumors with fallible, admirable humanity.”
—The Christian Science Monitor

"In imagining hilarious and scandalous interactions and snappy dialogue, Dario Fo brings the infamous Lucrezia Borgia to life. He removes her from the reduction to mere victim or evil temptress and constructs a compelling and comic tale that ironically comments on all the Borgias’ antics (or murderous schemes)."
—World Literature Today

"Fo’s high-spirited work, [is] a novel that comes close to a romp."
—Barnes & Noble Review

"The Pope’s Daughter offers a studied reconsideration of Lucrezia’s life, swerving dramatically from accounts of her as 'a monster, a poisoner, and a prostitute.'"
—Washington Post

"The Pope’s Daughter is sophisticated, clever, challenging [. . .]– everything we have come to expect from a Nobel Laureate and in a first novel."
—Book Sexy Review

"Fo is a kind of medieval jester, and here he entertainingly describes the many virtues of that grand dame of the Renaissance, Lucrezia Borgia."
—El País (Spain)

"In this novel, Fo reveals Lucrezia's humanity, thus liberating her from the stereotypes of wanton, incestuous woman and placing her into proper historical context and into her day-to-day life."
—The Huffington Post (Italy)

"Dario Fo takes the image that has been sent down to us all the way from John Ford's Tis a Pity She's a Whore through Victor Hugo's play Lucrezia Borgia to a slew of the recent popular biographies and turns it inside out."
—La Repubblica (Italy)