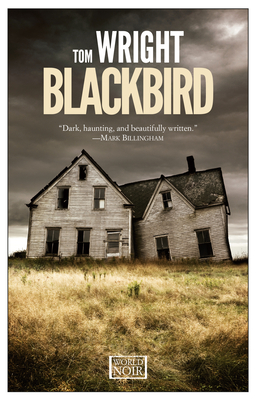 
Available to Order - Usually Arrives in Our Store in 4 to 7 Days
On the Arkansas-Louisiana-Texas border, Detective Jim Beaudry Bonham has been assigned a bewildering case: a woman has been brutally attacked and nailed to a cross on the outskirts of town the day after a devastating storm unnerves the community. Bonham recognizes her immediately as Dr. Deborah Gold, the town's well-known psychologist. Sensing how many secrets Dr. Gold took to her grave, Bonham's field of suspects grows to include the culture of the town itself—multiplying the questions that might explain how and why such a gruesome murder could be committed.

With the participation of complex, fully realized characters, Blackbird is not only a commanding crime novel: it is also an exploration of small-town life and how it's affected by violence and savagery. Wright's incisive description of the setting and characters perfectly juxtaposes the unknowns surrounding the murder, making Blackbird a memorable addition to the crime canon.
What Lies in Summer, Tom Wright's debut novel, was a New York Times Editor's Pick and a finalist for the Crime Writer's Association Dagger Awards. A Texas native, Wright is a licensed and practicing psychologist in Texarkana, Texas.

"A crime novel that does so much more than most others in the genre. Blackbird is dark, haunting and beautifully written."
—Mark Billingham, author of the Tom Thorne series

“The prose is muscular and refreshingly dense, and the characters are rendered with such complexity that they feel more real than fictional, a quality that makes the novel all the more harrowing.”
—Bret Anthony Johnston, author of Corpus Christi

“Wright portrays events vividly, […] as he deftly uncovers the long-buried secrets of these fully developed characters. Best of all, this has all the markings of a continuing series—good news for fans of gripping crime fiction with a paranormal twist.”
—Booklist (starred review)

“Wright has a gift for creating distinct and intriguing characters, none more so than Jim, a fully rounded person with friends and family who works closely with his fellow police officers—a refreshing change from the typical hard-bitten rogue cop so popular in the genre today.”
—Publishers Weekly (starred review)

“A page turner and a wonderfully satisfying read.”
—Under the Radar