The Eye Stone: The First Medieval Noir About the Birth of Venice (Paperback) 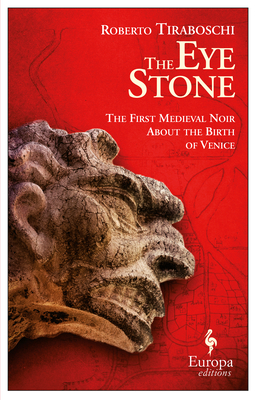 By Roberto Tiraboschi, Katherine Gregor (Translated by)
$17.00
Available to Order - Usually Arrives in Our Store in 4 to 7 Days

In the twelfth century AD, Venice is little more than an agglomeration of small islands snatched from the muddy tides. The magnificent city-lagoon of Venice, the rich and powerful Serene Republic, is yet to be born. Here, in this northern backwater, a group of artisans have proven themselves to be unrivalled in an art form that produces works of such astounding beauty that many consider it mystical in nature and think its practitioners possessed of otherworldly gifts. They are glassmakers. Presciently aware of the power they wield and the role they will play in the Venice of the future, the Venetian glassmakers inhabit a world of esoteric practices and secret knowledge that they protect at all costs.

Into this world steps Edgardo D’Arduino, a cleric and a professional copyist. Edgardo’s eyesight has begun to waver—a curse for a man who makes his living copying sacred texts. But he has heard stories, perhaps legends, that in Venice, city of glassmakers, there exists a stone, the lapides ad legendum, that can restore one’s sight. However, finding men who have knowledge of this wondrous stone proves almost impossible. After much searching, Edgardo meets a mysterious man who offers him a deal: he will lead him to the makers of the lapides ad legendum in exchange for Edgardo’s stealing a secret Arabic scientific text that is kept in the abbey where Edgardo lodges. When a series of horrific crimes shakes the cloistered world of the glassmakers, Edgardo realizes that there is much more at stake than his faltering eyesight.

Equal parts The Name of the Rose and The Da Vinci Code, Roberto Tiraboschi’s English-language debut is a gripping historical thriller and a magnificent recreation of Venice in the Middle Ages.

Roberto Tiraboschi was born in Bergamo (Italy) and lives between Rome and Venice. Screenwriter and playwright, he has worked with Nobel laureate Dario Fo and written screenplays for Italian directors, including Marco Pontecorvo, Silvio Soldini, and Liliana Cavani among others. His novels, Sonno and Sguardo 11, have enjoyed considerable success with both critics and readers. The Eye Stone is the first of his novels to be published in English.

Katherine Gregor translates from Italian, Russian and French. Her published translations include Stone Goddess by Luigi Pirandello, Eugene Onegin (a translation and dramatization pf Pushkin's novel, directed on the london stage by Susannah York), The Whales Know by Pino Cacucci, and The Battle of Shadows by Andrea Japp. She also writes plays, fiction and a regular blog (scribedoll.wordpress.com).

Praise for The Eye Stone

"Tiraboschi is part of the great tradition of European storytellers and yet he reminds readers of contemporary classics like Perfume by Süskind and Ingenious Pain by Andrew Miller."
—Sergio Pent

“Setting the action in medieval Venice was a stroke of genius, thanks to Tiraboschi's keen historical eye and sense of atmosphere.”
—ShelfAwareness

"Roberto Tiraboschi knows how to recount a city and an era that are both poisoned by intrigue and violance. His writing is powerful and evocative."
—Venerdí di Repubblica

“A compelling, enlightening read with characters exhibiting both strength and weakness in physcal and moral terms, each one appealing in a distinct way and a great twist at the end. If you love Italy, Venice, history, mystery, a good story…you have them all right here.”
—Mountains and Plains Independent Booksellers Association

"A generous, thrilling look at the birth of modernity and the embryonic splendors of a city that is unique in the world."
—La Stampa

“Tiraboschi is playful enough to weave in a good deal of profanity and even some buffoonery and also insightful enough to remind the reader periodically of the sheer technological miracle that sits perched so cheaply and easily on the bridge of their nose, allowing them to read the pages in front of them.”
—Open Letters Monthly