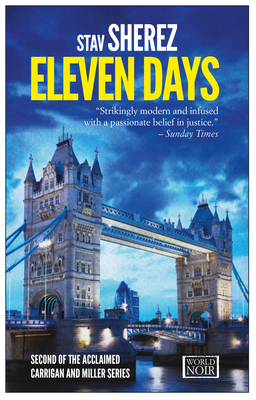 Book Two in the Carrigan and Miller series

It is eleven days before Christmas, and an early morning fire rages through a West London square, engulfing a convent tucked within a handsome residential neighborhood. Detectives Jack Carrigan and Geneva Miller arrive at the dreadful scene to find eleven dead bodies—but there were only ten nuns in residence. Despite the department’s top brass pressing for the case to be solved before the holidays, the detectives suspect more than mere arson. Why did the nuns make no move to escape the fire? Who is the eleventh victim? And where is the convent’s influential priest liaison to the church, the one man who can answer their questions?

Shortlisted for the coveted Old Peculier Novel of the Year award, Eleven Days, the new entry in Sherez’s acclaimed series which began with A Dark Redemption, follows Carrigan and Miller as they unravel an elaborate mystery that spans four decades and two continents. On their second case together, the partners, at once fresh and familiar, confront both their haunting pasts and the dangers that threaten to cut short their futures. As pressure intensifies to close the case, they struggle to solve a hidden history whose exposure threatens both the church and the political establishment.
Stav Sherez is a freelance journalist and the author of three previous novels. The Devil's Playground (2004), his debut, was described by James Sallis as "altogether extraordinary, it introduces a major new talent," and his second novel, The Black Monastery (2009), was described as "dynamite fiction" in the Independent and 'spectacular' by Laura Wilson in the Guardian. A Dark Redemption (2013, Europa Editions) was shortlisted for the Theakstons Old Peculier Crime Novel of the Year and is the first of  a striking new police procedural series featuring DI Jack Carrigan and DS Geneva Miller.
Praise for Eleven Days

Praise for A Dark Redemption

"The action builds to a jaw-dropping resolution. Readers will want to see more of this convincingly flawed hero."
—Publishers Weekly (Starred Review)

“[A] masterly thriller [...] with [a] complicated and compelling detective duo...”
—The New Yorker

“A superior novel, well written and plotted, with a convincing backdrop about a continent that rarely features in crime fiction.”
—Marcel Berlins, The Times

“Fast paced and slick, this is the first in what could well be an outstanding series.”
—Laura Wilson, The Guardian

“With cracking pacing and prose which tends towards the lyrical[,] Sherez has produced a stand out piece of work that will definitely be making my top five books of the year.”
—Crime Fiction Lover

“A Dark Redemption is a clever, multi-layered beginning to a promising new series . . . Sherez does a masterful job with a particularity haunting plot.”
—Henry Sutton, (Book of the Week) The Daily Mirror