The Castle of Whispers (Hardcover) 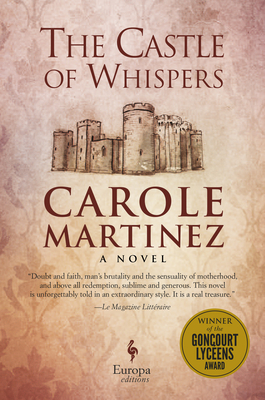 By Carole Martinez
$22.95
Available to Order - Usually Arrives in Our Store in 4 to 7 Days

In 1187, on the day of her wedding, the beautiful 15-year-old Esclarmonde scandalizes the court when she refuses to accept the knight chosen by her father, the lord of the domain of Whispers. She defies her father’s wishes and vows to give herself to God, for which he imprisons her in a cell adjoining the castle’s chapel. Instead of the peaceful solitude she sought, Esclarmonde finds in her cell the crossroads between the living and the dead. Walled in, with nothing but a single barred window to connect her to the outside world, Esclarmonde nevertheless exerts a mysterious and pervasive power over the kingdom. The virgin sorceress reaches a saint-like status, and men and women journey from far and wide to hear her speak. Esclarmonde even persuades her father to wage war in the Holy Land, resulting in a massacre of staggering proportions.

Carole Martinez teaches French at a middle school in Issy-les-Moulineaux. She began writing during her maternity leave in 2005. The Castle of Whispers is her second novel, following The Threads of the Heart.

“In Carole Martinez’s lush prose, this period novel appears astonishingly modern… The Castle of Whispers rolls out its music, intoxicating.”—L’express

“The second novel from Carole Martinez is cut from the same cloth as her first, The Threads of the Heart…It confirms that this 44-year-old woman is a marvelous storyteller.”—Le Figaro

“From one finely orchestrated plot twist to another, the story—or rather the heady voice of Esclarmonde—pulls us through time to the realm of the living and of the dead, of history and of legend.”—Télérama

“There is much D. H. Lawrence in Carole Martinez’s writing.”—Bibliobs