The Last Train to Paris (Paperback) 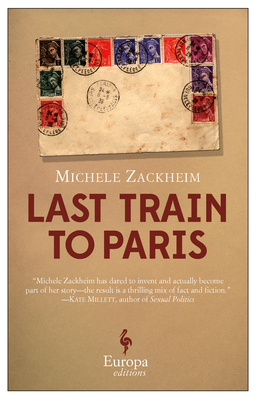 The Last Train to Paris (Paperback)


Available to Order - Usually Arrives in Our Store in 4 to 7 Days
1935.  Rose Manon, an American daughter of the mountains of Nevada, working as a journalist in New York, is awarded her dream job, foreign correspondent.  Posted to Paris, she is soon entangled in romance, an unsolved murder, and the desperation of a looming war.  Assigned to the Berlin desk, Manon is forced to grapple with her hidden identity as a Jew, the mistrust of her lover, and an unwelcome visitor on the eve of Kristallnacht.  And . . . on the day before World War II is declared, she must choose who will join her on the last train to Paris.
This is a carefully researched historical novel that reads like a suspense thriller.  Colette and Janet Flanner are only two of the well-known figures woven into the story. The parts they play will surprise readers. Last Train to Paris will enthrall the same audience that made In The Garden of Beasts by Erik Larson and Suite Française by Irène Némirovsky bestsellers.
Michele Zackheim worked as a visual artist before turning to writing. She has shown in numerous museums and galleries. She is also the author of Einstein’s Daughter, nonfiction, and Violette’s Embrace. She lives with her husband in New York.

“This is a beautiful novel, sometimes comic and always wise.” – Library Journal