Everyone in Their Place: The Summer of Commissario Ricciardi (Paperback) 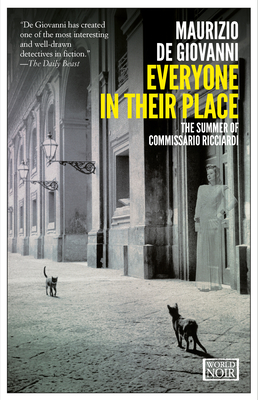 Everyone in Their Place: The Summer of Commissario Ricciardi (Paperback)

This is book number 3 in the Commissario Ricciardi series.

Commissario Ricciardi has visions. He sees and hears the final seconds in the lives of victims of violent deaths. It is both a gift and a curse. It has helped him become one of the most acute and successful homicide detectives in the Naples police force. But the horror and suffering he has seen has hollowed him out emotionally. He drinks too much and sleeps too little. His love life is a shamble. Other than his loyal partner, Brigadier Maione, he has no friends.

We are in Naples, 1931. Together with his indefatigable partner, Brigadier Maione, Ricciardi is investigating the death of the beautiful and mysterious Duchess of Camparino, whose connections to privledged Neapolitan social circles and the local fascist elite make the case a powder keg waiting to explode. As Benito Mussolini's state visit to Naples looms and authorities frantically seek to clean up the city's image, Ricciardi will stop at nothing to find the duchess's killer.
Maurizio de Giovanni lives and works in Naples. In 2005, he won a writing competition for unpublished authors with a short story set in the thirties about Commissario Ricciardi, which was then turned into the first novel of the series. His books have been successfully translated into French, Spanish and German, and are now available in English.

Praise for the Commissario Ricciardi Series

"De Giovanni has created one of the most interesting and well-drawn detectives in fiction."
—The Daily Beast

"Reading a novel by Maurizio de Giovanni is like stepping into a Vittorio De Sica movie."
—The New York Times