I Will Have Vengeance (Commissario Ricciardi #1) (Paperback) 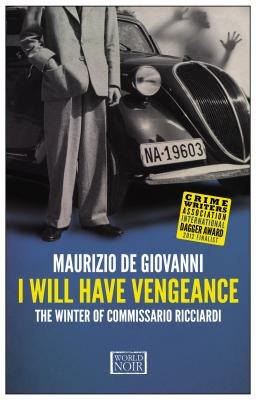 I Will Have Vengeance (Commissario Ricciardi #1) (Paperback)

This is book number 1 in the Commissario Ricciardi series.

Commissario Ricciardi has visions. He sees the final seconds in the lives of victims of violent deaths. It is both a gift and a curse. It has helped him become one of the most successful homicide detectives on the Naples police front. But the horror of his visions has hollowed him out emotionally. He drinks too much and sleeps too little. Other than his loyal partner, Brigadier Maione, he has no friends.

Naples, March 1931: a bitter wind stalks the city streets, and murder lies at its chill heart. When the world's greatest tenor, Maestro Arnaldo Vezzi, is found brutally murdered in his dressing room at Naples' San Carlo Theatre, the enigmatic and aloof Commissario Ricciardi is called in to investigate.

Arrogant and bad-tempered, Vezzi was adored by millions and hated by hundreds, but with the livelihoods of everyone at the San Carlo opera at stake, who there would have committed such an act? Ricciardi is determined to find out.

Fans of Donna Leon and Manuel Vázquez Montalbán will thrill to this fresh voice in crime fiction. I Will Have Vengeance is the first book in a quartet of masterful crime novels set in fascist Italy.
Maurizio de Giovanni lives and works in Naples. His Commissario Ricciardi series, of which I Will Have Vengeance is the first, has quickly made him one of Italy's most popular and acclaimed crime authors. Europa Editions has published all five books in the series—Everyone in Their Place, The Day of the Dead, I Will Have Vengeance, Blood Curse, and By My Hand—and the standalone Neapolitan thriller, The Crocodile.


Anne Milano Appel's translation of Stefano Bortolussi's novel Head Above Water was the winner of the 2004 Northern California Book Award for Translation.

Praise for I Will Have Vengeance

"The combination of an unusual detective, historical setting and Italian opera was impossible to resist."
—Crimetime.co.uk

"...such detailed images in the novel that will haunt me for a long time to come"
—Books and Writers

"...a colourful novel that imparts a strong sense of time and place...there's more than a touch of Agatha Christie in this tale."
—Curious book fans