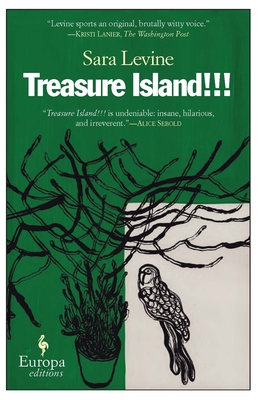 
Available to Order - Usually Arrives in Our Store in 4 to 7 Days
When a college graduate with a history of hapless jobs (ice cream scooper; gift wrapper; laziest ever part-time clerk at The Pet Library) reads Robert Louis Stevenson's novel Treasure Island, she is dumbstruck by the timid design of her life. When had she ever dreamed a scheme? When had she ever done a foolish, overbold act? When had she ever, like Jim Hawkins, broke from her friends, raced for the beach, stolen a boat, killed a man, and eliminated an obstacle that stood in the way of her getting a hunk of gold?

Convinced that Stevenson's book is cosmically intended for her, she redesigns her life according to its Core Values: boldness, resolution, independence and horn-blowing. Accompanied by her mother, her sister, and a hostile Amazon parrot that refuses to follow the script, our heroine embarks on a domestic adventure more frightening than anything she'd originally planned.

Treasure Island!!! is the story of a ferocious obsession, told by an original voice-intelligent, perverse, relentlessly self- extricating, and funny.
Sara Levine teaches at the Art Institute of Chicago. Her stories have appeared in The Iowa Review, Nerve, Conjunctions, Necessary Fiction, Sonora Review, and other magazines. She won a 2008 Bridport Prize for Fiction, a Special Mention in The Pushcart Anthology, and three citations in The Best American Essays. Her writing has been anthologized in Best of Fence: The First Nine Years and The Touchstone Anthology of Creative Nonfiction: 1970 to the Present.

"[An] irreverent comic novel of self-empowerment."
—O, The Oprah Magazine

"An absurdist comedy of suburbia."
—The New York Times

"Levine's subtle insight about the egocentric nature of our society is knife-sharp."
—Minneapolis Star Tribune