The Vanishing Messiah: The Life and Resurrections of Francis Schlatter (Paperback) 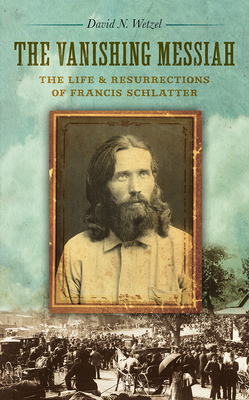 The Vanishing Messiah: The Life and Resurrections of Francis Schlatter (Paperback)


Title unavailable, please email for information.
In 1895, an extraordinarily enigmatic faith healer emerged in the American West. An Alsatian immigrant and former cobbler, Francis Schlatter looked like popular depictions of Jesus, and it was said that his very touch could heal everything from migraines and arthritis to blindness and cancer. First in Albuquerque, and then in Denver, thousands flocked to him, hoping to receive his healing touch. Schlatter accepted no money for his work, behaved modestly, fasted heavily, and treated everyone, from wealthy socialites to impoverished immigrants, equally. He quickly captured national attention, and both the sick hoping to be cured and reporters hoping to expose a fraud hurried to Denver to see the celebrated healer. By November of 1895, it is estimated that Schlatter was treating thousands of people every day, and the neighborhood in which he was staying was overrun with the sick and lame, their families, reporters from across the country, and hucksters hoping to make a quick buck off the local attention. Then, one night, Schlatter simply vanished. Eighteen months later, his skeleton was reportedly found on a mountainside in Mexico’s Sierra Madre range, finally bringing Schlatter’s great healing ministry to an end.

Within hours of the announcement of Schlatter’s found remains, a long-haired man emerged in Cleveland to say that he was Francis Schlatter, and the next twenty-five years, several others claimed to be Denver’s great healer. In The Vanishing Messiah, a modern researcher painstakingly pieces together evidence from letters, newspaper reports, hospital records, mug shots, and published reminiscences of the healer to find out what really happened to Francis Schlatter after he left Denver in the middle of the night in November 1895. In doing so, David N. Wetzel uncovers a historical puzzle of lies, deception, and betrayal, and offers a tantalizing look into a nineteenth-century messiah and his twentieth-century reincarnations—one of whom may have been the healer himself.

David N. Wetzel spent twenty-six years with the Colorado Historical Society as a writer, historical interpreter, editor, and director of the publications program. He is the author of I Looked in the Brook and Saw a Face: Images of Childhood in Early Colorado and coauthor of Robert S. Roeschlaub: Architect of the Emerging West, 1843–1923. He lives in Kansas City, Missouri.

“The Vanishing Messiah resurrects the enigmatic figure of Francis Schlatter, whose healing ministry once held America spellbound. Who was this charismatic man, and what really became of him? A graceful writer and dogged detective, David N. Wetzel pierces this compelling mystery and makes his readers care deeply about the answers.”—David Von Drehle, author, Rise to Greatness: Abraham Lincoln and America’s Most Perilous Year


“David N. Wetzel has written a masterpiece of compelling biography, history, intrigue, and mystery. His subject is Francis Schlatter, who stunned the nation during the mid-1890s by his Christlike healing of the sick and lame. But Wetzel offers more than just the story of a forgotten miracle worker. The Vanishing Messiah also follows the author’s personal journey to unravel the mystery behind Schlatter’s life and death—altogether a tour de force, with an ending as surprising as it is revealing.”—David Fridtjof Halaas, former Colorado State Historian

“David N. Wetzel has delivered a fascinating tale of faith, fervor, disillusionment, and hope among turn-of-the-twentieth-century Americans who sought to live examined lives. The charismatic healer Francis Schlatter emerges as an unforgettable character, a mysterious man of deep convictions and troubling contradictions. This story of his life and times is consummately researched and masterfully told.”—Scott Zesch, author, The Captured: A True Story of Abduction by Indians on the Texas Frontier