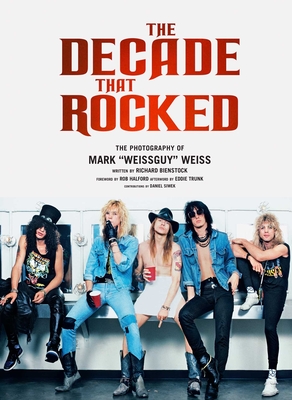 
Available to Order - Usually Arrives in Our Store in 4 to 7 Days
“I have read pretty much every rock 'n' roll biography there is worth reading, and you never know what to expect when you pick up a new book. Well, let me tell you Mark Weiss has raised the bar for rock 'n' roll books with The Decade That Rocked. Mark has always been at the top of his field, and the level of detail and quality put into this book is the ultimate testament to his rock n' roll photographic legacy.” –  Sebastian Bach

“Mark is the real deal. He may not play the guitar, but that camera is his guitar. He’s a rockstar.” – Gene Simmons

"Mark’s energy, his creativity, his drive, his positive attitude and his enthusiasm that make him one of the legends of rock photography. It’s why his work—both old and new—is still so in demand today. Mark Weiss inspires greatness in all he turns his camera lens on. But don’t take my word for it. Just look at the pictures in this book." – Dee Snider

“His pictures say as much as the music” – Rob Halford

“He was one of the guys. He wasn’t one of the 18 photographers you’d work with that day.” – Alice Cooper

“He had that instinct, to recognize our energy and use his technical talent to capture it.” – Joe Perry

“The Decade That Rocked breaches a level of intimacy that so many music photographers are lacking today.  Each and every photo exemplifies the trust and the synergy between photographer and subject.  You can feel the essence of the music in the live shots, just as vibrantly as you can feel the spirit and the essence of the musicians behind the scenes.” – Screamer Magazine

Mark “Weissguy” Weiss set an unmatched standard for rock photography. Starting out as a teenager by sneaking into concerts with a neighbor’s 35mm camera, he embarked on a legendary career that took him around the globe and onto some of the most memorable album and magazine covers in rock history– featuring the likes of Van Halen, Ozzy Osbourne, Aerosmith, and Mötley Crüe to Metallica, Guns N’ Roses, Bon Jovi, and KISS, and so many more. With 700+ photos, brand new interviews, and stories from Mark himself, Decade that Rocked is a monument to the photography, friendships, and legacy of an artist that helped define one of rock’s most iconic eras.

Captured from the unique vantage point of a photographer who lived and breathed the ’80s in all its grit and glory, The Decade That Rocked brings to life the no-holds-barred sounds and sights that changed the world of hard rock and metal forever.

RICHARD BIENSTOCK is a journalist whose writing has appeared in the New York Times, Rolling Stone, Billboard, Spin, and other publications. He is a former senior editor of Guitar World magazine and executive editor of Guitar Aficionado magazine. He has authored several books, among them Kurt Cobain: Montage of Heck and Nothin' But a Good Time: The Uncensored History of the '80s Hard Rock Explosion.

Rob Halford is best known as the lead vocalist for the Grammy Award-winning heavy metal band Judas Priest and famed for his powerful wide-ranging voice that ranges from a low, rumbling growl to an ear-splitting falsetto effortlessly. Halford is widely referred to as "The Metal God", not just for his powerful vocals, but also for his contributions and dedication to the metal genre.