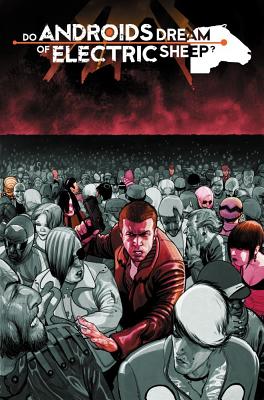 
Email or call for price. Handling fee may apply.
The Eisner Award-nominated, faithfully adapted comic maxi-series of Philp K. Dick's sci-fi masterpiece now available in a collector's edition slipcase THE BOOK THAT INSPIRED THE FILM BLADE RUNNER COMES TO BOOM with backmatter by Warren Ellis Worldwide best-selling sci-fi writer Philip K. Dick's award-winning DO ANDROIDS DREAM OF ELECTRIC SHEEP? has been called "a masterpiece ahead of its time, even today" and served as the basis for the film BLADE RUNNER. BOOM Studios is honored to present the complete novel transplanted into the comic book medium, mixing all new panel-to-panel continuity with the actual text from the novel in an innovative, ground-breaking maxi-series experiment illustrated by acclaimed artist Tony Parker Now, for the first time, BOOM present the first three hardcover collections in a stunning collector's edition slipcase. A $75 dollar value for just $50.
Philip K. Dick is widely considered one of the most influential science fiction minds of the 20th century. His works have been the inspiration behind some of the most popular and successful films of all time, including BLADE RUNNER, TOTAL RECALL, and MINORITY REPORT. A Hugo Award winner for his book THE MAN IN THE HIGH CASTLE, Philip K. Dick went on to change the face of science fiction literature with his body of work including DO ANDROIDS DREAM OF ELECTRIC SHEEP?, A SCANNER DARKLY, UBIK and more. Philip K. Dick passed away in 1982. Rising superstar artist Tony Parker is best known for his work on WARHAMMER 40,000: FIRE AND HONOUR, WARHAMMER 40,000: DEFENDERS OF ULTRAMAR, and the WARHAMMER: AGE OF RECKONING graphic novel.