Neither Wolf Nor Dog: On Forgotten Roads with an Indian Elder (Paperback) 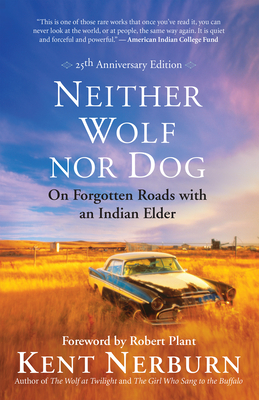 Neither Wolf Nor Dog: On Forgotten Roads with an Indian Elder (Paperback)

Against an unflinching backdrop of 1990s reservation life and the majestic spaces of the western Dakotas, Neither Wolf nor Dog tells the story of two men, one white and one Indian, locked in their own understandings yet struggling to find a common voice. In this award-winning book, acclaimed author Kent Nerburn draws us deep into the world of a Native American elder named Dan, who leads Kent through Indian towns and down forgotten roads that swirl with the memories of the Ghost Dance and Sitting Bull. Along the way we meet a vivid cast of characters -- ranging from Jumbo, a 400-pound mechanic, to Annie, an eighty-year-old Lakota woman living in a log cabin with no running water. An unlikely cross between On the Road and Black Elk Speaks, Neither Wolf nor Dog takes us past the myths and stereotypes of the Native American experience, revealing an America few ever see.
A two-time winner of the Minnesota Book Award, Kent Nerburn is the author of many books on spirituality and Native American themes, including Letters to My Son, Small Graces, Simple Truths, The Wolf at Twilight, and The Girl Who Sang to the Buffalo. He lives near Portland, Oregon