Six by Ten: Stories from Solitary (Voice of Witness) (Hardcover) 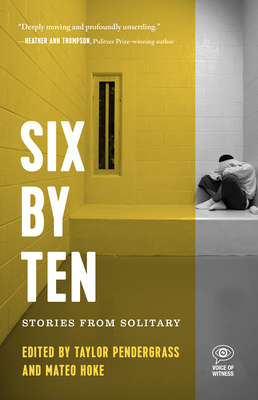 By Taylor Pendergrass (Editor), Mateo Hoke (Editor)
$42.00
Available to Order - Usually Arrives in Our Store in 4 to 7 Days

This compelling collection of stories told directly by people personally impacted by solitary confinement is the first book in a new Voice of Witness series with Haymarket Books.

Each chapter presents a different individual's story and probes how Americans from all over the country and all walks of life find themselves held in solitary for years or even decades at a time. In addition to evocative first-hand accounts, the book also includes essays and analysis on how solitary became such a prominent feature of the US prison system today.

Solitary confinement is the little-known dead end of the US criminal justice system. To understand that system, people need to understand and wrestle with what is happening in America's isolation cells.

Mateo Hoke is writer, journalist, and co-editor of Palestine Speaks: Narratives of Life Under Occupation.

Taylor Pendergrass is a lawyer and activist focused on criminal justice reform. He currently works for the American Civil Liberties Union.