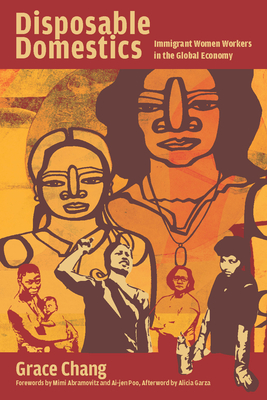 Illegal. Unamerican. Disposable. In a nation with an unprecedented history of immigration, the prevailing image of those who cross our borders in search of equal opportunity is that of a drain. Grace Chang's vital account of immigrant women--who work as nannies, domestic workers, janitors, nursing aides, and homecare workers--proves just the opposite: the women who perform our least desirable jobs are the most crucial to our economy and society. Disposable Domestics highlights the unrewarded work immigrant women perform as caregivers, cleaners, and servers and shows how these women are actively resisting the exploitation they face.

Grace Chang is a writer and activist, joining in struggles for the rights of migrant women and women of color in the United States. She teaches about social science research methods and ethics; women resisting and surviving violence in all forms; and grassroots, transnational, feminist social justice movements. She is founding director of WORD (Women Of color Revolutionary Dialogues), a support group for women and queer and trans people of color building community through spoken word, political theater, music, dance and film. Foreword by Alicia Garza writer and Oakland-based activist. Garza is one of the co-founders of Black Lives Matter, an organization founded in 2013 after the shooting death of Florida teen Trayvon Martin. Afterword by Ai-jen Poo is the director of the National Domestic Workers Alliance and the codirector of the Caring Across Generations campaign. She is a 2014 MacArthur fellow and was named one of Time 100's world's most influential people in 2012. She is the author of The Age of Dignity: Preparing for the Elder Boom in a Changing America. Follow her on Twitter @aijenpoo