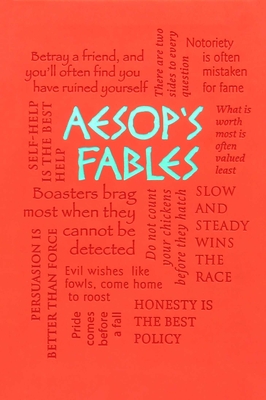 
On Our Shelves Now
A collection of charming and enduring stories that convey morals to young and old alike.

Aesop was a slave and storyteller who lived in ancient Greece around 620–564 BCE. No writings by him exist (if they ever existed at all), yet numerous stories and tales have been credited to him and have been shared through oral tradition throughout the world.  Many of these use animals as the main characters to convey deeper meanings and morals that have become ingrained in our cultural—and personal—belief systems. For example, in “The Goatherd and the Goat” we learn that there is no use trying to hide what can’t be hidden. In “The Ass and the Purchaser” we find that people are known by the company they keep. In “The Boys and the Frogs,” one person’s pleasure may be another person’s pain. “The Dogs and the Fox” show how easy it is to kick a man when he’s down. And misery loves company, as we see in “The Fox Without a Tail.” Aesop’s Fables has been one of the world’s most charming collections of stories that have influenced thousands of other literary works.

About the Word Cloud Classics series:

Classic works of literature with a clean, modern aesthetic! Perfect for both old and new literature fans, the Word Cloud Classics series from Canterbury Classics provides a chic and inexpensive introduction to timeless tales. With a higher production value, including heat burnished covers and foil stamping, these eye-catching, easy-to-hold editions are the perfect gift for students and fans of literature everywhere.
Aesop was a fabulist or story teller credited with a number of fables now collectively known as Aesop's Fables. Although his existence remains uncertain and (if they ever existed) no writings by him survive, numerous tales credited to him were gathered across the centuries and in many languages in a storytelling tradition that continues to this day. Many of the tales are characterized by animals and inanimate objects that speak, solve problems, and generally have human characteristics.