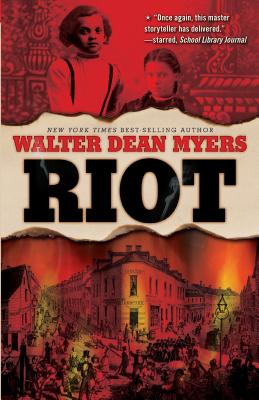 As the Civil War rages, another battle breaks out behind the lines. During a long hot July in 1863, the worst race riots the United States has ever seen erupt in New York City. Earlier that year, desperate for more Union soldiers, President Abraham Lincoln instituted a draft--a draft that would allow the wealthy to escape serving in the army by paying a $300 waiver, more than a year's income for the recent immigrant Irish. And on July 11, as the first drawing takes place in Lower Manhattan, the city of New York explodes in rage and fire. Stores are looted; buildings, including the Colored Foundling Home, are burned down; and black Americans are attacked, beaten, and murdered. The police cannot hold out against the rioters, and finally, battle-hardened soldiers are ordered back from the fields of Gettysburg to put down the insurrection, which they do--brutally. Fifteen-year-old Claire, the beloved daughter of a black father and Irish mother, finds herself torn between the two warring sides. Faced with the breakdown of the city--the home--she has loved, Claire must discover the strength and resilience to address the new world in which she finds herself, and to begin the hard journey of remaking herself and her identity. Addressing such issues as race, bigotry, and class head-on, Walter Dean Myers has written another stirring and exciting novel that will shake up assumptions, and lift the spirit.

Walter Dean Myers is one of the best known writers of children's literature working today. His work has received numerous awards, including two Newbery Honors, five Coretta Scott King Awards, the Michael L. Printz Award, the Margaret A. Edwards Award, two Lee Bennett Hopkins Awards, the ALAN Award, and many others, including the 2008 Arbuthnot Award from the ALA. This year, he is the first time winner of the Coretta Scott King-Virginia Hamilton Award for Lifetime Achievement, which will be presented at ALA in Washington. Besides writing, Walter loves collecting photographs and ephemera dealing with black history, and owns several pieces from this period, including an actual $300 waiver of the Civil War draft."