Crashing the Idols: The Vocation of Will D. Campbell (and Any Other Christian for That Matter) (Paperback) 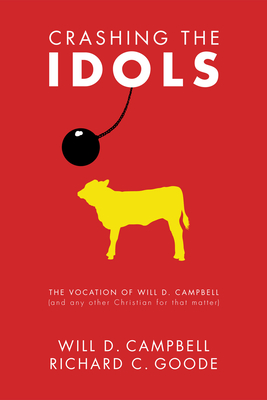 Crashing the Idols: The Vocation of Will D. Campbell (and Any Other Christian for That Matter) (Paperback)


Available to Order - Usually Arrives in Our Store in 4 to 7 Days
Description: If prophets are called to unveil and expose the illegitimacy of those principalities masquerading as ""the right"" and purportedly using their powers for ""the good,"" then Will D. Campbell is one of the foremost prophets in American religious history. Like Clarence Jordan and Dorothy Day, Campbell incarnates the radical iconoclastic vocation of standing in contraposition to society, naming and smashing the racial, economic, and political idols that seduce and delude. Despite an action-packed life, Campbell is no activist seeking to control events and guarantee history's right outcomes. Rather, Campbell has committed his life to the proposition that Christ has already set things right. Irrespective of who one is, or what one has done, each human being is reconciled to God and one another, now and forever. History's most scandalous message is, therefore, ""Be reconciled "" because once that imperative is taken seriously, social constructs like race, ethnicity, gender, and nationality are at best irrelevant and at worst idolatrous. Proclaiming that far too many disciples miss the genius of Christianity's good news (the kerygma) of reconciliation, this Ivy League-educated preacher boldly and joyfully affirms society's so-called least one, cultivating community with everyone from civil rights leaders and Ku Klux Klan militants, to the American literati and exiled convicts. Except for maybe the self-righteous, none is excluded from the beloved community. For the first time in nearly fifty years, Campbell's provocative Race and Renewal of the Church is here made available. Gayraud Wilmore called Campbell's foundational work ""an unsettling reading experience,"" but one that articulates an unwavering ""confidence in the victory which God can bring out of the weakness of the church."" Endorsements: ""Richard Goode is at it again, much like Will Campbell before him. Both of these southern Christian iconoclasts have helped me to appreciate what Goode calls 'the genius of Radical Christianity.' I recommend this book as an inspiring introduction to Campbell's life, prophetic witness, and to all for which he stood. May it embolden others to stand against 'the principalities and powers of the world.'"" --Douglas A. Sweeney author of The American Evangelical Story ""Here is a book whose radical fidelity to the kingdom of God will shake you to the core. Drawing on the life and teachings of Will Campbell, Goode explains, for example, why Jesus 'was a traitor' whose 'Way is to commit treason, ' and why there is finally no hope for principalities and powers like the PTA, the Pentagon, Communism, the Methodist Church, or the United States of America. If this book doesn't turn your world upside-down, then either you missed the point or you're not serious about following Jesus."" --Richard T. Hughes author of Christian America and the Kingdom of God About the Contributor(s): Will D. Campbell was a Baptist preacher in Taylor, Louisiana, for two years before taking the position of Director of Religious Life at the University of Mississippi from 1954 to 1956. Forced to leave the university because of his ardent Civil Rights participation, Campbell served on the National Council of Churches in New York as a race relations consultant. Campbell worked closely with the Rev. Martin Luther King Jr., John Lewis, and Andrew Young toward bettering race relations. Campbell's Brother to a Dragonfly earned him the Lillian Smith Prize, the Christopher Award, and a National Book Award nomination. The Glad River won a first-place award from the Friends of American Writers in 1982. His works have also won a Lyndhurst Prize and an Alex Haley Award. Richard C. Goode is Professor of History at Lipscomb University in Nashville, and coordinates the Lipscomb University program at the Tennessee Prison for Women.