Truths Among Us: Conversations on Building a New Culture (Flashpoint Press) (Paperback) 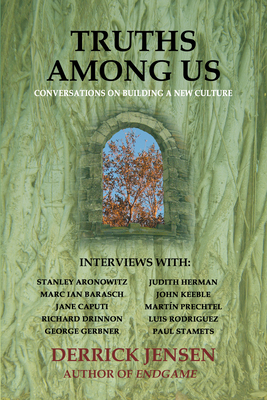 Truths Among Us: Conversations on Building a New Culture (Flashpoint Press) (Paperback)

From acclaimed author Derrick Jensen comes a prescient, thought-provoking collection of interviews with 10 leading writers, philosophers, teachers, and activists who argue against society's belief that corporations and governments know what is best for the future, instead choosing to help acknowledge the values we know in our hearts are right—and inspire within us the courage to act on them. Among those who share their wisdom here are acclaimed sociologist Stanley Aronowitz, who shows that science is but one lens for discovering knowledge; Luis Rodriguez, poet and peacemaker, who suggests embracing gang members as people instead of stereotypes; Judith Herman, who offers a deeper understanding of the psychology of abusers; Paul Stamets, who reveals the power of fungi that is often ignored; and writer Richard Drinnon, who reminds us that our spiritual paths need not be narrowed by the limiting mythologies of Western civilization. Reaching toward a common goal of harmony with the world surrounding us all, these diverse voices articulate different yet shared visions of activism.

Derrick Jensen is the author of numerous books, including Endgame, A Language Older Than Words, and This Culture of Make Believe. He lives in Crescent City, California.


"Jensen has compiled an ambitious compendium of truly important issues, and the book is an eye-opening and educational read." —Political Media Review on Resistance Against Empire

"An appealing diversity of voices, each articulating a different vision of environmental activism...they promote diverse paths toward a deep connection to place and nature — a connection that could lay the basis for significant social transformation." —The Independent on How Shall I Live My Life?

"Derrick Jensen is the green thinker and writer who’s out to tell us not what we want to hear but what we need to hear." —Utne Reader, "50 Visionaries Who Are Changing Your World"

"Derrick Jensen is a man driven to stare without flinching at the baleful design of our culture... His analysis of our culture's predilection for hatred and destruction will rattle your bones." —Daniel Quinn, author, Ishmael

“Derrick Jensen is a rare and original voice of sanity in a chaotic world. He has wisdom and wit, grace and style, and is a wonderful guide to a good life beautifully lived.”  —Howard Zinn, author, A People's History of the United States

"Although the book offers a compelling account of the thoughts of these scholars, on rare occasions the book takes a personal twist . . . lending this thought-provoking series of interviews an intimate dimension." —Publishers Weekly (October 10, 2011)

"If there is any word that immediately comes to mind when reflecting on this book, it has to be 'possibility' because the content of each interview reminds me that there are always people in the world who are thinking on levels that most others aren't." —www.PoliticalMediaReview.org (October 2011)