Liberating Society from the State and Other Writings: A Political Reader (Paperback) 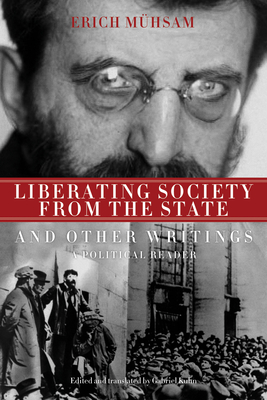 Liberating Society from the State and Other Writings: A Political Reader (Paperback)


Available to Order - Usually Arrives in Our Store in 4 to 7 Days
Featuring a riveting collection of anarcho-communist poetry, essays, articles, and diary entries, this translation of Erich Mühsam’s legendary writings introduces the German revolutionary’s ideas to English speakers for the first time. Uniting a burning desire for individual liberation with radical, left-wing convictions and bohemian strains with syndicalist tendencies, this diverse body of work not only includes his main political pamphlet and one of the key texts in the history of German anarchism but also some of his best-known poems, unbending defenses of political prisoners, passionate calls for solidarity among the proletariat, recollections of the utopian community of Monte Verità, debates on the rights of homosexuals and women, and the role of intellectuals in the class struggle. Perfect for anarchists, activists, or those interested in German history, this expansive and enlightening compilation provides a deep understanding of this important historical figure.

Erich Mühsam was one of Germany’s most renowned and influential anarchists who authored several political essays, articles, and poems. He spent his last 16 months in detention and died in the Oranienburg Concentration Camp in July 1934. Gabriel Kuhn is an author and translator whose previous works include Life Under the Jolly Roger: Reflections on Golden Age Piracy.


"The struggles of the German working class in the early 20th century are perhaps some of the most bitter and misunderstood in European history, and it is time they were paid more attention. This book is the right place to start." —Richard Parry, author, The Bonnot Gang

"We need new ideas. How about studying the ideal for which Erich Mühsam lived, worked, and died?" —Augustin Souchy, author, Beware Anarchist: a Life for Freedom

"An opponent of capitalism and war, defender of the rights of women and homosexuals, and a prominent libertarian voice in the Weimar Republic, Muhsam’s life and times remain of great interest and contemporary relevance." —Victor Osprey, anarkismo.net