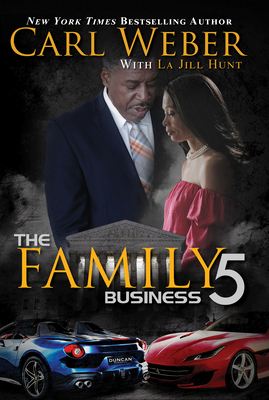 
Available to Order - Usually Arrives in Our Store in 4 to 7 Days
New York Times bestselling author Carl Weber and Essence bestseller La Jill Hunt return with a story of love, betrayal and racism in the next addition to the wildly popular Family Business series.

From the time he was a boy in Georgia, LC Duncan, patriarch and leader of the Duncan clan, has battled racism. Even now that he and his family are truly successful, the racism can still be in-your-face. Maybe it’s the political climate or perhaps it’s just bad timing, but LC and the rest of the Duncans are being challenged by the ultimate power-hungry racist, Sheriff KD Shrugs.

Nevada Duncan is at that age when girls and sex are always on his mind. His handsome face and superior intellect attract Kia, the beautiful “Blasian” call girl who tempts him into running away to a place where the Duncans are definitely not wanted—El Paso, Texas, the home of KD Shrugs.

What is the worst thing that can happen to a handsome, rich millennial? Rio Duncan would say it’s mistaken identity after being beat down in a nightclub by someone who thinks he’s Roman Johnson, a stickup kid who happens to be Rio’s doppelganger. What happens next will open up the biggest can of worms the Duncans have ever had to deal with.

Get ready for another roller coaster ride with the Duncan family.
Carl Weber is the New York Times bestselling author of The Preacher’s Son, So You Call Yourself a Man, Something on the Side, Up to No Good, Big Girls Do Cry, Torn Between Two Lovers, and She Ain’t the One. He is the Publisher and Editorial Director of Urban Books and CEO of Urban Books Media, which has produced The Man in 3B and the Preacher’s Son based on two of his bestselling novels. The Family Business film is currently in production. His Web site is carlweber.net.

La Jill Hunt is a native of Mobile, AL who burst onto the literary scene in 2003 with her debut novel, Drama Queen. The memorable characters she created and the entertaining stories she told quickly drew bestselling success and a following of fans, young and old. Although known for her urban chick-lit novels, she has also contributed to the street anthology series Around the Way Girls, and penned an urban romance, Another Sad Love Song. Her erotic short story, Catch 22, is available as a digital download. Currently residing in Virginia Beach, La Jill enjoys spending time with her daughters, family, and friends.