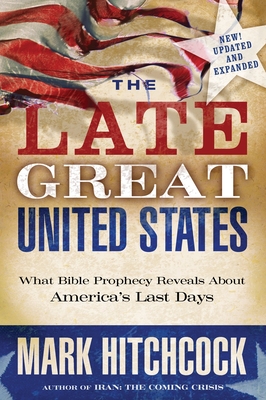 By Mark Hitchcock
$14.99
Available to Order - Usually Arrives in Our Store in 4 to 7 Days

Will God Bless America--Even in the End Times?

Every day brings more news of a world that seems to teeter on a disastrous precipice:
. Wars of genocide
. Massive earthquakes and typhoons
. The rising cost of foreign oil
. Terrorist bombings
. Economic disasters and lost security
. Crushing federal debt
. Famine and worldwide hunger
. a tidal wave of illegal immigrants

How many of these events and crises are signs of the "end times"? And what will become of the United States? Will America continue to slip as today's lone world superpower, and will it even exist when the sounds of warfare rumble at the Battle of Armageddon?

Learn of America's final fate and the outcome of dire events at the end of the age as Mark Hitchcock teaches how to find the only lasting hope in a God who will not forsake us--no matter what cataclysms we experience on earth.

Mark Hitchcock, PhD, an authority on Bible prophecy, has written more than a dozen books on the topic, including Iran: The Coming Crisis. A law school graduate, Mark was called to the ministry in the 1980s. After graduation from seminary, he became pastor of Faith Bible church in Edmond, Oklahoma, where he still serves. Mark lectures frequently on prophecy themes and has appeared on MSNBC, Fox News, and CNN. Mark and his wife, Cheryl, have two sons, Justin and Samuel.