Tough Guy: My Life on the Edge (Paperback) 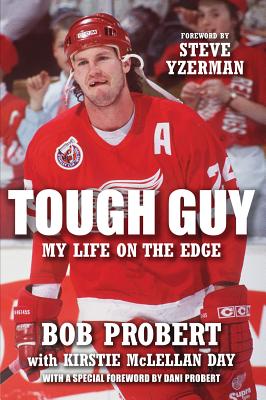 Documenting his notorious career with the Detroit Red Wings and the Chicago Blackhawks, Bob Probert details in this autobiography how he racked up points, penalty minutes, and bar bills, establishing himself as one of the most feared enforcers in the history of the NHL. As Probert played as hard off the ice as on, he went through rehab 10 times, was suspended twice, was jailed for carrying cocaine across the border, and survived a near fatal motorcycle crash all during his professional career, and he wanted to tell his story in his own words to set the record straight. When he died unexpectedly of a heart attack at the age of 45 on July 5, 2010, he was hard at work on his memoir—a gripping journey through the life of Bob Probert, with jaw-dropping stories of his on-ice battles and his reckless encounters with drugs, alcohol, police, customs officials, courts, and the NHL, told in his own voice and with his rich sense of humor.

Bob Probert was a winger with the Detroit Red Wings and the Chicago Blackhawks between 1986 and 2002. He supported many local charities and twice visited troops in Afghanistan. He died suddenly in 2010 at the age of 45 while boating with his family. Kirstie McLellan Day is the author of Above and Beyond, No Remorse, the number one bestselling memoir Playing with Fire, and Under the Mat. She lives in Calgary, Alberta. Dani Probert is the wife of Bob Probert. Steve Yzerman is a former player for the Detroit Red Wings, a member of the Hockey Hall of Fame, and the general manager of the Tampa Bay Lightning.