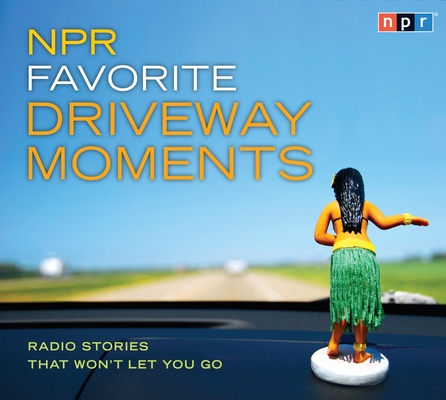 By Renée Montagne (Performed by), NPR, Ensemble Cast (Read by)
$22.95
Available to Order - Usually Arrives in Our Store in 4 to 7 Days

Every NPR listener has had at least one “driveway moment” and probably more. You’re so captivated by a story on All Things Considered, Weekend Edition, Morning Edition, News & Notes, or another NPR program that you stay in the car to hear it through—even if you've arrived at your own driveway. This eclectic collection gathers all-time favorites, including some suggested by listeners themselves.

These literate, intelligent, profoundly touching stories are worth hearing over and over again, and now you don’t have to stay in your car.

RENÉE MONTAGNE is host of NPR’s Morning Edition, the most widely heard broadcast news program in the United States. Since 2004, she has been broadcasting from NPR West in Culver City, California, with cohost Steve Inskeep in Washington. In 1994, she and a team of NPR reporters won a prestigious Alfred I. duPont-Columbia University Award for coverage of South Africa’s historic presidential and parliamentary elections. Montagne has been honored by the Overseas Press Club for her coverage of Afghanistan, and by the National Association of Black Journalists for a series on Black musicians going to war.

“Makes good on its promise, delivering 18 excellent examples of radio reporting that have held up through the years.”
—Audiofile