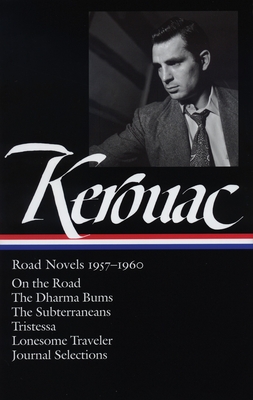 By Jack Kerouac, Douglas G. Brinkley (Introduction by)
$35.00
Available to Order - Usually Arrives in Our Store in 4 to 7 Days

The raucous, exuberant, often wildly funny account of a journey through America and Mexico, Jack Kerouac’s On the Road instantly defined a generation on its publication in 1957: it was, in the words of a New York Times reviewer, “the clearest and most important utterance yet made by the generation Kerouac himself named years ago as ‘beat.’” Written in the mode of ecstatic improvisation that Allen Ginsberg described as “spontaneous bop prosody,” Kerouac’s novel remains electrifying in its thirst for experience and its defiant rebuke of American conformity.

In his portrayal of the fervent relationship between the writer Sal Paradise and his outrageous, exasperating, and inimitable friend Dean Moriarty, Kerouac created one of the great friendships in American literature; and his rendering of the cities and highways and wildernesses that his characters restlessly explore is a hallucinatory travelogue of a nation he both mourns and celebrates. Now, The Library of America collects On the Road together with four other autobiographical “road books” published during a remarkable four-year period.

The Dharma Bums (1958), at once an exploration of Buddhist spirituality and an account of the Bay Area poetry scene, is notable for its thinly veiled portraits of Kerouac’s acquaintances, including Ginsberg, Gary Snyder, and Kenneth Rexroth. The Subterraneans (1958) recounts a love affair set amid the bars and bohemian haunts of San Francisco. Tristessa (1960) is a melancholy novella describing a relationship with a prostitute in Mexico City. Lonesome Traveler (1960) collects travel essays that evoke journeys in Mexico and Europe, and concludes with an elegiac lament for the lost world of the American hobo. Also included in Road Novels are selections from Kerouac’s journal, which provide a fascinating perspective on his early impressions of material eventually incorporated into On the Road.

LIBRARY OF AMERICA is an independent nonprofit cultural organization founded in 1979 to preserve our nation’s literary heritage by publishing, and keeping permanently in print, America’s best and most significant writing. The Library of America series includes more than 300 volumes to date, authoritative editions that average 1,000 pages in length, feature cloth covers, sewn bindings, and ribbon markers, and are printed on premium acid-free paper that will last for centuries.

Jack Kerouac(1922-1969), the central figure of the Beat Generation, was born in Lowell, Massachusetts, in 1922 and died in St. Petersburg, Florida, in 1969. Among his many novels are On the Road, The Dharma Bums, Big Sur, and Visions of Cody.