The Mythology of American Politics: A Critical Response to Fundamental Questions (Hardcover) 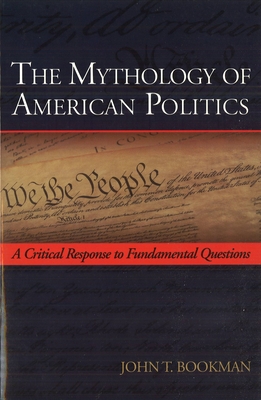 The Mythology of American Politics: A Critical Response to Fundamental Questions (Hardcover)


Available to Order - Usually Arrives in Our Store in 4 to 7 Days
In this provocative set of essays, John Bookman delves beneath the transitory issues of the day to identify and respond to the fundamental, perennial questions of American politics. The questions concern the myths that shape the thinking of so many Americans about politics. These myths are the popular narratives that impart meaning to the American experience and define for many what it is to be an American. For the first time, readers have under one cover a sober, informed examination of these myths.

Among the myths subjected to critical examination are the following:

1. The Framers of the Constitution were fundamentalist Christians. Americans at the time of the founding constituted a Christian nation.

2. The Framers were disinterested demigods who wrote a constitution for the ages.

3. James Madison intended separation of powers and checks and balances to protect the general citizenry against government.

4. Constitutional constraints on democratic majorities are necessary to prevent tyranny of the majority.

5. The United States is exceptional. It is more populist, egalitarian, religious, patriotic, and prosperous than other nations.

6. Americans are a chosen people marked out by God or history to carry out a world-historical mission.

7. The unfettered market uses resources more efficiently, better promotes growth, and confers more freedom than other ways of organizing the production and distribution of goods and services.

In his examination of these myths, Bookman does not slight argument in favor of description and explanation. He does not neglect description and explanation, but he enlists them in the service of arguments, and those arguments reach conclusions sure to be controversial.
John T. Bookman is professor emeritus of political science at the University of Northern Colorado. He has published articles on political philosophy and American politics in academic journals, and he taught those subjects to undergraduate and graduate students for thirty-four years. He is also the coauthor with Stephen T. Powers of The March to Victory, a History Book Club selection. He lives in the Denver area.

“The Mythology of American Politics addresses several important myths that have become staples of American democratic discourse. There are large and learned tomes about many of these myths, but none supplies the succinct summaries and syntheses that Bookman provides in his well-written, engaging, and accessible book, which makes an important contribution to the clarification—and perhaps even the resolution—of contemporary controversies over the American founding and its modern meaning.”—Terence Ball, professor of political science, Arizona State University

“Many thoughtful Americans are dismayed by the ideological combat that passes for debate over fundamental issues like America’s place in the world, the place of religion in our national life, and the nature and purpose of our democracy. John Bookman’s The Mythology of American Politics will begin to dissolve that dismay. His fine and intelligent book explores the deep structural assumptions of American political life with an eye toward exploding pervasive and long-standing myths and replacing them with a probing exploratory conversation about their meaning for the nation and its citizens.”—Cal Jillson, professor of political science, Southern Methodist University

“[Bookman’s] well-written essays draw critical distinctions that should both provoke critical thinking and spark good discussions among students. Recommended [for] general readers and undergraduate students of all levels."—Choice