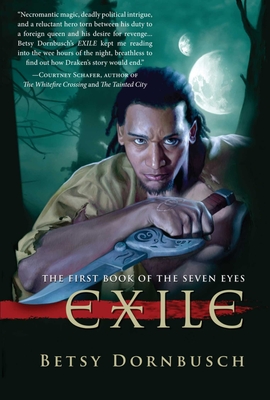 By Betsy Dornbusch
Email or call for price. Handling fee may apply.
Special Request - May Not Be Available

Draken vae Khellian, bastard cousin of the Monoean King, had risen far from his ignominious origins, becoming both a Bowrank Commander and a member of the Crown’s Black Guard. But when he is falsely condemned for the grisly murder of his beloved wife, he is banished from the kingdom and cast upon the distant shore of Akrasia, at the arse-end of the world.

Compared to civilized Monoea, Akrasia is a forbidding land of Moonlings, magic, and restless spirits. It is also a realm on the brink of a bloody revolution, as a sinister conspiracy plots against Akrasia’s embattled young queen–and malevolent banes possess the bodies of the living.

Consumed by grief, and branded a murderer, Draken lives only to clear his name and avenge his wife’s murder. But the fates may have bigger plans for him. Alone in a strange land, he soon finds himself sharing the bed of an enigmatic necromancer and a half-breed servant girl, while pressed into the service of a foreign queen whose life and land may well depend on the divided loyalties of an exiled warrior . . .

Exile is the beginning of an ambitious fantasy saga by an acclaimed new author.

Skyhorse Publishing, under our Night Shade and Talos imprints, is proud to publish a broad range of titles for readers interested in science fiction (space opera, time travel, hard SF, alien invasion, near-future dystopia), fantasy (grimdark, sword and sorcery, contemporary urban fantasy, steampunk, alternative history), and horror (zombies, vampires, and the occult and supernatural), and much more. While not every title we publish becomes a New York Times bestseller, a national bestseller, or a Hugo or Nebula award-winner, we are committed to publishing quality books from a diverse group of authors.

Betsy Dornbusch is the author of several short stories, novellas, and novels, including the Books of the Seven Eyes trilogy. In addition to speaking at numerous conventions and teaching writing classes, she has spent the past decade editing the online magazine Electric Spec and writing on her website, Sex Scenes at Starbucks (betsydornbusch.com).

Necromantic magic, deadly political intrigue, and a reluctant hero torn between his duty to a foreign queen and his desire for revenge . . . Betsy Dornbusch's Exile kept me reading into the wee hours of the night, breathless to find out how Draken's story would end.
—Courtney Schafer, author of The Shattered Sigil series.

Exile does an excellent job of fashioning a kingdom on the brink of implosion, as political, military, and personal factors place increasing pressure on the fragile peace that is already undermined by double agents and malignant magic. It also provides a unique conglomeration of magic, which is practiced mostly either by the enigmatic Moonlings or a race known as the Mance, who are in turns alluring and disturbing in their methods and manners.
—Josh Vogt, Examiner.com

An intriguing world, with its varied people and imperiled gods. The hero maintains his personal integrity even as the pawn of powers of whom he's barely aware, and the plot unfolds with the rapid pacing of a mystery novel.
—K. V. Johansen, author of Blackdog

From the first line ("Cut her throat. His own wife."), readers of Betsy Dornbusch's Exile know they are in for a dramatic and exciting tale. . . .Any reader who joins her for the ride will be glad they did.
—Lesley Smith, Electric Spec

Draken is an interesting character, and the secondary characters are equally interesting. The plot moves along nicely, and the story is engaging. I enjoyed the setting and found the author's world building commendable.
—Lori Macinnes, Lori Reads

“Betsy Dornbusch’s Exile is a nonstop adventure with a fascinating world and some terrific magic.”
—Carol Berg, author of Transformation and The Daemon Prism

"Exile does an excellent job of fashioning a kingdom on the brink of implosion, as political, military, and personal factors place increasing pressure on the fragile peace" - Josh Vogt, The Examiner