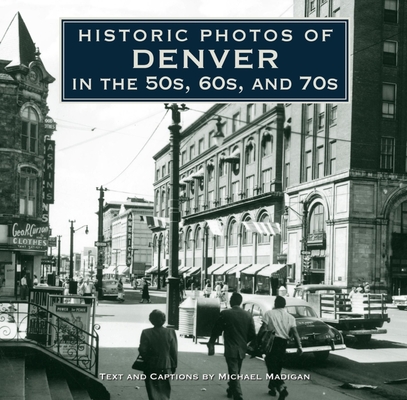 By Michael Madigan (Text by (Art/Photo Books))
$44.95
Available to Order - Usually Arrives in Our Store in 4 to 7 Days

In the decades after World War II, the Mile High City traded its cowtown image for the glitter of skyscrapers, big-league sports teams, Interstate highways, and urbanity. As the Urban Renewal wrecking ball erased the city's old skin and displaced some residents familiar with it, a new facade attracted Americans from far and wide in search of a Rocky Mountain way of life. Servicemen returning from the war came to build new businesses, and the next generation came just for the experience. The city could still take pride in the Brown Palace Hotel, the Daniels & Fisher Tower, the gold-domed State Capitol, and other emblems of its gold rush past, but its confidence in the future would give rise to ten new skyscrapers in one decade alone. How Denver reinvented itself and came to have the appearance it displays today is a subject of more than passing interest. In Historic Photos of Denver in the 50s, 60s, and 70s, nearly 200 images reproduced in vivid black-and-white, with captions and introductions, tell a story familiar to the citizens of Denver who lived and reminisce about it and one that will fascinate newcomers curious to know more.