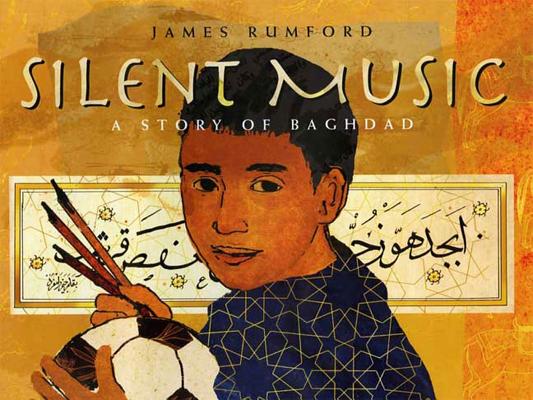 By James Rumford, James Rumford (Illustrator)
$18.99
Available to Order - Usually Arrives in Our Store in 4 to 7 Days

WHEN BOMBS BEGIN TO FALL, Ali drowns out the sould of war with a pen.

Like other children living in Baghdad, Ali loves soccer, music and dancing, but most of all, he loves the ancient art of calligraphy. When bombs begin to fall on his city, Ali turns to his pen, writing sweeping and gliding words to the silent music that drowns out the war all around him. Gorgeously illustrated with collage, pencil and charcoal drawings and, of course, exquisite calligraphy, this timely and yet universal story celebrates art and history but also offers young children a way to understand all they see and hear on the news.

Silent Music is a 2009 Bank Street - Best Children's Book of the Year.

I grew up in Southern California. I was a Peace Corps volunteer in Chad and Afghanistan. I was a Fulbright lecturer in Rwanda. I have lived in Honolulu for over thirty years. I began writing and illustrating children's books in 1996, with the publication of my first book, The Cloudmakers (Houghton Mifflin). Since that time, I have written and illustrated 16 books and many more are on the way. I am also interested in fine bookmaking and have my own letter press called Manoa Press, founded in 1986. I have published many limited-edition handmade books.

I grew up in Southern California. I was a Peace Corps volunteer in Chad and Afghanistan. I was a Fulbright lecturer in Rwanda. I have lived in Honolulu for over thirty years. I began writing and illustrating children's books in 1996, with the publication of my first book, The Cloudmakers (Houghton Mifflin). Since that time, I have written and illustrated 16 books and many more are on the way. I am also interested in fine bookmaking and have my own letter press called Manoa Press, founded in 1986. I have published many limited-edition handmade books.

“Art sings on the pages of this visual celebration of Arabic calligraphy as Rumford's (Sequoyah) collages of floral and geometric designs and flowing lines deftly echo Arabic language and patterns. "Writing a long sentence is like watching a soccer player in slow motion as he kicks the ball across the field, as I leave a trail of dots and loops behind me," says narrator Ali, explaining his love of calligraphy. Spreads incorporating stamps, money and postcards reinforce the Baghdad setting and complement representational scenes, such as an intricate collage of Ali huddling under a blanket next to his cat, writing. Arabic words, translated in places, sometimes embed in the pages as part of the illustrations, even patterning Ali's mother's dress. Like his hero, the famed calligrapher Yakut, who wrote through the destruction of Baghdad in 1258 ("he shut out the horror and wrote glistening letters of rhythm and grace"), Ali turns to calligraphy during the bombing of Baghdad in 2003. In an eloquent ending, he discovers that while the word "war" flows easily, the pen "stubbornly resists me when I make the difficult waves and slanted staff of salam--peace.” —Publishers Weekly - Starred Review

“A boy's ingenuous voice introduces American readers to the beauty and discipline of Arabic calligraphy in this mood piece set in Baghdad. Ali directly addresses readers, explaining how much he loves playing soccer and listening to loud music, and how he loves calligraphy even more: "my pen stopping and starting, gliding and sweeping, leaping dancing to the silent music in my head." His hero is Yakut, a 13th-century calligrapher who took solace in his art amidst the Mongol invasion. Like Yakut, Ali finds comfort in practicing his letters during the turmoil that has reigned in Baghdad since 2003. Rumford's sense of design is one of the keenest in the field; he incorporates patterned papers, collage elements and, over and over, the Arabic words themselves in his dusty, desert-colored spreads. The quiet text doesn't dwell on politics or conflict, simply on one boy's desire to find peace in his own life and how he uses calligraphy as a vehicle....” —Kirkus Reviews

“Ali, a young boy growing up in contemporary Baghdad, likes soccer, loud music, and dancing. But more than anything, he loves to create the letters of Arabic calligraphy. He loves the right-to-left movement, the flow of the ink from his pen "stopping and starting, gliding and sweeping, leaping, dancing to the silent music" in his head. His hero is Yakut, the thirteenth-century calligrapher who is thought to have fled to a high tower to write and "shut out the horror" when his Baghdad was destroyed by war. In the first-person text, Ali is a boy any child can understand, and when he writes his sister's name, Yasmin, and describes it as easy and beautiful, we know he is expressing brotherly affection. Later, when he has no trouble writing harb, the word for war, but struggles to draw the word for peace, sala-m, readers will feel Ali's pain for his country. Rumford's mixed-media illustrations echo the collage work of Ezra Jack Keats and Patricia Polacco while still being all about the calligraphy. Told plainly and without bathos, this is one story of how people use art to find understanding. r.l.s.” —The Horn Book Magazine

“Gr 2-6-Ali describes how he loves soccer; "loud, parent-rattling music"; and calligraphy-forming the elegant Arabic letters, pen "gliding and sweeping, leaping, dancing to the silent music in my head." His "secret hero" is Yakut, a renowned 13th-century calligrapher, and Ali tells how, when Mongols invaded Baghdad in 1258, the man fled to a high tower to shut out the violence by creating beauty, writing "glistening letters of rhythm and grace." Similarly, the boy sought solace from the missiles and bombs that fell on the city in 2003 by practicing calligraphy in his room. Since then, "one war has become another," and he continues to write, contemplating how some words, like "HARB-war," flow easily from the pen, while others, like "SALAM-peace," are more difficult to perfect. Jewel-toned illustrations done in pencil and charcoal and then computer enhanced accompany the lyrical text. Ali and his family are depicted with warmth and personality, and their interactions add intimacy to the story. Elaborately detailed designs appear throughout-intricate tile arrangements, delicate floral motifs, colorfully patterned clothing, even a backdrop that incorporates subtle images of warfare (army vehicles, helicopters, etc). Graceful lines of calligraphy flow across and are incorporated into the artwork. In addition to engendering appreciation for this art form, Rumford's book sheds light on life in war-torn Iraq and builds empathy for those caught in the crossfire.” —School Library Journal Starred Review

“My name is Ali. I live in Baghdad." In just a few lines per page, a young Iraqi boy describes his favorite things: soccer, loud "parent-rattling" music, dancing, and, most of all, Arabic calligraphy: "I love to make the ink flow . . . stopping and starting, gliding and sweeping, leaping, dancing to the silent music in my head." When bombs fall on the city, Ali, inspired by his hero Yakut, a thirteenth-century calligrapher, calms himself with his pen: "I filled my room with pages of calligraphy. I filled my mind with peace." Rumford, who has included Arabic calligraphy in previous titles, such as Calabash Cat and His Amazing Journey (2003), fills his multimedia collages with large, looping script that spells out the words and phrases that Ali writes. Many children will have questions about Arabic writing and where the individual letters stop and start, but they'll connect with Ali's first-person voice, which echoes the calligraphy's graceful rhythm and tells a simple, powerful story about a child's everyday survival and hope in wartime Baghdad.” —Gillian Engberg, Booklist

“Ad 7-10 yrs Rumford, whose interest in non-European languages has brought young readers Sequoyah (BCCB 1/05) and Seeker of Knowledge (BCCB 4/00), offers here a fictional tale of a young Iraqi boy whose interests comprise not only soccer and "loud, parent-rattling music", but also Arabic calligraphy. Ali's dedication to developing his skill prompts his mother to nickname his Yakut, after a thirteenth century calligrapher who "shut out the horror" of a Mongol invasion by fleeing to a tower where he could write in peace. And that, indeed, is just what Ali has done_ blocking out his fear during the 2003 invasion to "[fill] his mind with peace." Having remarked that many words are easier to form than others , he closes with the weighty observation that "war" flows easily off the pen, while "peace" is much more challenging to master. Clothing and backgrounds are rendered in dense geometric patterns of Arabic decorative art, while text boxes, snippets of Ali's writing, and an assortments of jottings in various formats are layered into mixed-media collages in radiant, strongly contrasting hues. The view of one boy's experience in a war-torn country is compelling, especially in light of the historic precedent. Having hooked his audience on the beauty, elegance, and skill of Ali's craft, however, Rumford gives no real explanation of how written language is constructed (apart from its right to left direction); the few Western alphabet letters he occasionally lays alongside an Arabic word do little to help audiences visualize how or where the component strokes are joined. Children inspired to attempt a bit of calligraphy on their own will therefore need to look elsewhere for guidance, but this may be an inviting peek for Western children into another culture. EB” —Bulletin of the Center for Children's Books

“Silent Music: A Story of Baghdad written and illustrated by James Rumford, an Honor Book for Younger Children, is a Neal Porter Book/Roaring Brook Press, an imprint of Macmillan Children's Publishing Group. Ali, a boy living in Baghdad today, loves soccer, parent-rattling music, dancing, and, most of all, calligraphy. His lively life, extended family and thoughtful nature flow from pages that weave calligraphy, intricate patterns and backdrops of golden brown into their design. Drawing strength from explicit visual and textual references to Iraq's long history of literacy, the story of Ali's passionate practice of calligraphy, first, highlights the power of literacy as a creative force in the midst of war, then, as a metaphor, invites reflection on the difficulty of practicing peace. ” —Jane Addams Children's Book Award Press Release