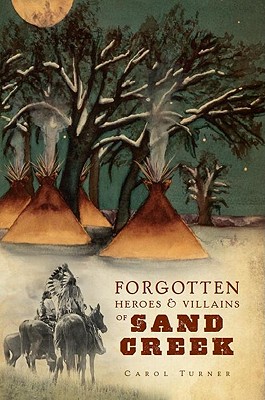 On November 29, 1864, Colonel John Chivington led a bloody and terrible raid on an encampment of Arapahos and Cheyennes who had come to the area believing they were on a path to peace. Before it was over, between 130 and 180 Native Americans had been massacred. This attack, known as the Sand Creek Massacre, is one of the most well-known and notorious events in Colorado's history. In Forgotten Heroes and Villains of Sand Creek, author Carol Turner turns an eye to the central characters, their histories and how they came to be part of this bloody episode. This fascinating look at such a pivotal event, its instigators and its martyrs includes the stories of John Chivington, an ambitious preacher with a streak of cruelty; Captain Silas Soule, a man who is still honored today by the Cheyenne and Arapaho tribes for his efforts in saving their ancestors; Ned Wynkoop, one of Soule's compatriots who had a change of heart regarding the tribes; Chief One Eye, a persuasive and charismatic medicine man; and many, many more.